The Night of Open Collaborations 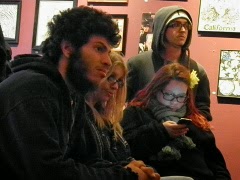 As a chilled breeze reminiscent of the wintry season came to visit the Northeast PA region on Sunday March 23rd, I entered The Sherman Theater’s Living Room in Stroudsburg, PA to partake of another installment of its weekly Open Mic Nite Series some time before the event was scheduled to begin. The volunteered staff had already made preparations for the evening’s festivities and I was fortunate enough to witness one of its frequent participants, Dave Pugh, on electric guitar and co host Andrew Oldfield on drums jamming up a storm. A little while later, Co host AP (aka Andrew Paul) shared the microphone with the illustrious Rachel Burke who sang a few tunes together just for fun.

The joyous frivolity of the scene greeted those who entered the venue to partake of it’s opportunities to share their talents. An opportunity to experience the love for the art of performing demonstrated by the co hosts and others through this pre-show excursion proved to be a heartening inspiration to many. The time for those wishing to participate in the evening’s event to affix their signatures to the sign in sheet began to make its approach and musicians and poets made themselves ready to do so.

After the sign in list quickly absorbed the names of those who wished to perform, the signatories began to practice their crafts alone or with friends while conversations filled with the excitement of what wonders were to come their way consumed the room. It was when the 7pm hour arrived did an exuberant co host, Andrew Oldfield, took to the drum set in order to wake up the gathering to a new adventure in song and poetry until a less excitable co host (AP) took the stage to share his welcoming remarks and to introduce the fist performer to bless the mic for the evening.

Robin Danien was new to the gathering and began the night with an expression of faith. The desire to become a sanctuary for a divine power translated it sentiment to the venue’s lexicon well as it prepared itself to partake and be an embodiment of the sacred gifts of artistic expression that would be abundant throughout the evening. She was followed by Brad McCool who was joined by AP and Dee “Songbird” Allen who sang the song titled, “Royals” originally written and sung by Ella Marija Lani Yelich-O’Connor (aka Lorde) and co written by Joel Little. The song was released on Ms. O’Connor’s 16th Birthday and can be found on her 2013 CD titled, “Pure Heroin.”. The performance of the song by the collaborative endeavor of the trio expanded the dimensions of the original version which greatly impressed those who have an affinity with the composition.

Brad and company was followed by Dave Pugh whose playful talents prior to the commencement of the open mic nite event evolved to its fullest potential as the familiar riffs moved to encircle the auric imagination of his listeners. Dave was followed by Tycho whose absence from the venue was felt by those who have come to love his musical stylings and his noteworthy generosity as he is known collaborate with many of the musicians present during his time on stage. The evening proved to be no exception as Tycho invited Dee “Songbird” Allen, AP, Melissa Johnson, and a person whose name I neglected to ask for to join him in a series of songs of which their unique talents combined to elevate their quintessential qualities to their highest levels and beyond.

Tycho and his friends were followed by AP, who took the mic as “AP Box.” www.facebook.com/APbboxes4u AP continued the spirit of collaborative endeavors by inviting frequent performers of the event, Mabus and Dee “Songbird” Allen, to the mic. Together they played with one hip hop phrasing after another inspiring a flood of mouthwatering dreams as the focus of one piece centered around pizza. AP was followed by the return of a poet known as “Kittie Meow” who had been absent from the mic for quite some time and whose initial utterances reminded those who have experienced her meaningful words why they miss her and her poetry so much. Her poetry (especially the one she wrote that evening while Tycho was performing) closed the spaces between our hearts and souls until their seamless dreams became the embodiment of our realities.

A break ensued after Kittie’s poetic awakenings and a great number of conversations rebounded off the walls of The Living Room. The performances resumed with the arrival of a duo known as Justin and Gabriel. While Justin made his musical debut the previous week, this was Gabriel’s first time before The Living Room’s microphone which she blessed with her uncannily beautiful voice which combined with Justin’s to create an aura around each lyric to divinely touched those who heard it. They were followed by the return of Melissa Johnson to the stage who furthered blessed the audience with her marvelous voice that has echoed upon every soul since the first time she brought forth its qualities during her first performance at the Open Mic Nite series. Her performance during this segment of the series penetrated the essence of the gathering forming a solidarity of spirits whose destined desire was to become one with each note she transformed through her voice. Later, she was joined by Dee “Songbird” Allen and together their voices brought an “Ah” sensation to the crowd.

Melissa and Dee were followed on stage by guitarist Kes Lyman whose familiar presence to the venue never fails to bring a smile to those who hear him. His performance was a consistency for those who have come to admire his outstanding talents and his renditions of songs established by other artists as well as the songs he had composed. He was followed by the poet known as “Max” whose recitations brought about a good deal of thought mingled with amusements to those who were fortunate enough to embrace his words. Max was followed by newcomers to the gathering named Denzel and Lola with Denzel sharing one hip hop phrasing sequence after another while Lola playfully struck one action pose after another. This couple brought one smile after another from the audience as many hoped they would return in the near future.

Denzel and Lola were followed by Sick Antelope Party www.facebook.com/sickantelopeparty who consists of Vid Ryan, Kes Lyman, and Amy Burawski whose transcendent talents combine to create a performance art group mixing the ingredients of music and the spoken word art form known as poetry into a conglomeration of conceptual imageries until their spatial realities gravitate toward the cohesive elements embodied in a dream. The trio instills a relaxed sigh in the hearts and minds of those who experience their mastery upon the temporal essence of the arts they employ in their performance. So much so, both the co hosts of the evening’s Open Mic Nite took some time before they could bring themselves to verbally respond to the moment that had taken them from one reality to the next.

When they were given the words to do so, the co-hosts shared their amazement of what they had experienced and announced the list of performances had come to its conclusion. However, there was time for those who had placed their name upon the waiting list to bring their talent to the night. A young woman who had come to the event often but had not placed her name upon the list until that night came forth. Her name was Mary and she read her exquisite poetry to the gathering from her electronic device. The words moved about the room as each poem’s countenance placed the essentials found in each phrase gently upon the heart.

It was with her final breath did the evening come to a close with a collection of farewells filling the room soon afterwards. The evening proved to be a great one filled with collaborative endeavors reflecting upon the love the denizens of The Living Room have for the art they share and for each other. All who moved beyond the venue’s doors into he chilled night air yearned for the week to pass so they may partake of the blessing they experienced that night once again. You’ll be able to find more photographs taken during the Sunday March 23rd Open Mic Nite Session in The Living Room 2014 Gallery Part 2 at www.facebook.com/media/set/?set=a.10152275669355421.1073741879.636000420&type=1.

The next installment of the Living Room Open Mic Nite Series will take place on Sunday March 30th beginning at 7pm with sign ins beginning at 6:30pm. Musicians, poets, writers, and anyone who would like to share something with a receptive audience are welcomed to do so. You can learn more about The Living Room Open Mic Nite Series by Exploring their Facebook Page at www.facebook.com/OpenMicAtTheLivingRoom.

In addition to the Open Mic Nites presented at The Living Room, the venue also holds a Gallery which presents the work of visual artists from around the area. Their current exhibit is titled, “Music and Album Art” which features the work of local artists will continue to be on display until March 26th. Their next exhibition will feature the work of Leonard Boone, Ashley Fontones, Eric Goins, and Ben Schwartz with an Artists’ Reception scheduled for Saturday April 5th beginning at 6pm. Music for the reception will be presented by Kes Lyman and Olivia Zinn along with a “Perspective Objective!” Photo Contest, an Art Raffle, and an opportunity to make a donation to their Community Tree with proceed benefiting the gallery. The exhibition continues until April 30th.  The following exhibit will be their next group show in May titled, “Art-ology.” Please contact the gallery’s Director and Curators, Keyaira and Drew Ozkenel, at 570-421-2808.

The Living Room is located on Main Street in Stroudsburg, PA next to The Sherman Theater who owns the building. The Living Room is a non-profit artspace and community hub featuring live music, performance, and other events in an intimate setting at affordable prices. Please Explore The Living Room Facebook Page at www.facebook.com/pages/The-Living-Room/123978921059378 for more information on The Living Room, all they have to offer, and how to be a part of it all.
Posted by Unknown at 2:32 PM