Gold Rots and Brian at The OMN 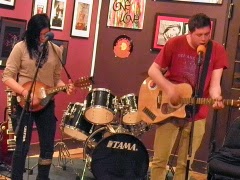 During the early evening hours of Sunday March 16th, I entered The Sherman Theater’s Living Room to partake of another installment of its weekly Open Mic Nite Series. The co hosts for the evening were busily setting up the room to accommodate the many performers who would come to share their talents in the venue and I had the opportunity to meet with the special featured guest musicians who were to perform during the event. It was during my conversation with them did the 6:30pm hour arrive signifying the time has come for those who wished to participate to let their wishes be known by adding their name to the sign in list.

As it is customary in The Living Room during its Open Mic Nite event, the list was filled in a matter of minutes with noms and nom de plumes as the room became filled with excited conversations and the sounds of preparations being made which included the tuning of many musical instruments. The many who came to dwell in the night’s enchantments found their places among the available seats and upon the floor to await for the 7pm hour to arrive during which one of the Open Mic’s co-hosts, Jessie Roth (aka JR), took the stage to welcome the gathering and shared some poetry that amused while inspiring a degree of contemplation upon their deeper meanings. It was soon after this was the first performer upon the list was announced.

Dee “Songbird” Allen was the first to take the stage. An applause greeted her as she plugged in her guitar and sat upon a chair to prepare herself to sing her first song. The renditions of the pieces she shared were embraced by the many who have come to adore her voice and stylings over the months since they first began being touched by her performances. However, those who had come to the venue for the first time found themselves to be equally enamored by her songs and talent.

As Dee “Songbird” Allen concluded her set, one of the Open Mic’s co-hosts, Andrew Oldfield, took the stage in order to introduce his fellow co-host, AP (aka Andrew Paul), who took the mic as “AP Box” and proceeded to open his box of vocal manipulations which magically captivated the audience through their amusing and realistic sonic effects. AP was followed by electric guitarist David Pugh who has frequently performed during the event and whose musical ebbs and flows took the audience sailing upon the tides of the songs he played. He was followed by Kidd Marvel www.facebook.com/TheKiddsWorld whose gentle and thoughtful delivery of Hip Hop compositions flowed among the denizens of The Living Room and moved them like a wave traveling to reach the shoreline where they could find a place to subside. He was followed by the first of the special featured guest musicians who came to the stage to perform.

After some introductions and technical adjustments to the microphones were made, Kevin Boardman (aka Cold Rots) and his guitar took the stage along with Gabiella “Gabby” Le who joined him on Mandolin. Their performance heated the Living Room to volcanic proportions in a matter of seconds as the energy of the music and communicative effects of the lyrics devoured the venue. A joy was felt by each listener as they were happily engulfed by the essential qualities of each song which contained a certain depth that was much appreciated and brought a smile to many who embraced it. The duet concluded their set with a song by the punk rock band known as “Against Me!” titled, “Sink, Florida, Sink” which appears on their 2003 album titled, “Against Me! as the Eternal Cowboy” as a tribute to a friend who was a drummer for another band who passed away recently.

Kevin (aka Cold Rots) and Gabby traveled from the Boston, MA area to Stroudsburg, PA in order to perform at The Sherman Theater’s Living Room as part of a Mini Tour they are conducting along with Brian Dickens who would perform later. Although the two had played together for some time, this was the first time Kevin and Gabby performed on a tour circuit together. Cold Rots has recently released a CD titled, “So It Goes” which you can learn more about along with Cold Rots (aka Kevin Boardman) by exploring their Facebook Page at www.facebook.com/kevinboardmanmusic.

The audience were asked to come closer to the stage as Kevin and Gabby made their exit so Brian Dickens could come before the microphone with his guitar in hand. Brian was the second of the special featured guest musicians to perform for the Open Mic Nite gathering who began by sharing some remarks expressing his appreciation for the opportunity to play in the venue. His voice surrounded the audience with its cadence allowing its subtle inflections to penetrate deeply into the thoughts of those who experienced its vibrational qualities. The lyrics of his songs brought to each listener a contemplative thought and a smile as the realizations they revealed through their stories proved to be insightful. Brian ended his set with his rendition of the song titled, “Believe” which was recorded by Cher and written by Brian Higgins, Stuart McLennen, Paul Barry, Steven Torch, Matthew Gray, and Timothy Powell. The album of the same name was released on in 1998.

Brian Dickens traveled from Boston, MA area to Stroudsburg, PA in order to perform at The Sherman Theater’s Living Room as part of his Rock N Roll Will Never Die Tour. He began his music career when he joined the choir of The United Parish Church of Winchendon, MA in 1995. He later won his High School’s Annual Battle Of The Bands competition and began performing at new church halls and art galleries so he could prove myself to my local artistic community. He continues to perform in a variety of venues with song dealing with the challenges of living in a small community and the effects money has on one’s life. You can learn more about Brian Dickens and his music by exploring his Facebook Page at www.facebook.com/briandickens978.

A break ensued after the performances given by Kevin (aka Cold Rots), Gabby, and Brian concluded. This gave many the opportunity to learn more about and from the musicians and to add their CDs and other merchandise to their collections. A great number of conversations filled the room until the Open Mic Nite’s co hosts, AP and Jessie Roth, appeared on the stage to share some announcements prior to the resumption of the evening’s festivities. These announcements included the venue’s offer of an opportunity for attendees to share in the duties of co hosting the series with a scavenger hunt being planned to determine who would be the person chosen. A promise of more details were given before it was announced who the next performer would be.

C-Rock took the stage and introduced himself as a shock rapper upon which he proceeded to share several concepts and points of view that may have shocked some but mostly provided thoughtful insights of many meaningful issues that need to be examined and addressed. C-Rock was followed by a Newcomer guitarist to Open Mic Nite named Justin Parks whose renditions of several songs transcended the beauty of depth of the original versions. Justin was followed by Wilbium whose synthesized instrumental moved through the psychedelic extremities of the mind like a cube of LSD but without much of the druggy aftereffect. Wilbium was followed by Vid Ryan of the newly formed “Sick Antelope Party” www.facebook.com/sickantelopeparty who shared a poem he wrote and spoken during a previous Open Mic Nite which allowed the audience to circle and absorb each nuanced concept he conveyed. But, what impressed the audience of the March 16th gathering was the fact that he had memorized the lengthy piece and continued to captivate the imagination of those who heard it.

Vid Ryan was followed by Woodrow www.facebook.com/wearewoodrow who has appeared several times during previous Open Mic Nites and will be the opening act for the Rick Springfield Concert scheduled to take place at The Sherman Theater located in Stroudsburg, PA on Friday March 28th. The duo consists of Theresa Ratliff on vocals and Brian Bramkamp on vocals and guitar and they performed a number of songs dating back to the 1980s in preparation for their March 28th performance. The songs included “King of Pain” which was written by Gordon Matthew Thomas Sumner (aka Sting) and appears on the 1983 album titled, “Synchronicity” performed by the group known as The Police. Their rendition added some dimension to the original work and allowed those who heard it to explore its deeper meanings.

Woodrow was followed by Bradley Mc Cool who shared a number of his thoughts which led many to contemplate them with wonderment. He was followed by a newcomer to the event named, “Rob” who performed a number of Hip Hop songs that proved to be very well presented and led those who listened to be drawn into the imagery his words created. He was followed by the Open Mic’s co-hosts, Andrew Oldfield, who took the stage to perform several eclectic guitar selections which closed out the program for another week.

Farewells were shared and hopes to partake of next week’s Open Mic Nite at The Sherman Theater’s Living Room were expressed. It was a great night filled with the music and poetry of the caliber consistent with the reputation the venue has deservingly gained. You’ll be able to find more photographs taken during the Sunday March 16th Open Mic Nite featuring Kevin Broadman, Gabriella Le, and Brian Dickens in The Living Room 2014 Gallery Part 2 at www.facebook.com/media/set/?set=a.10152275669355421.1073741879.636000420&type=1.

The next installment of the Living Room Open Mic Nite Series will take place on Sunday March 23rd beginning at 7pm with sign ins beginning at 6:30pm. Musicians, poets, writers, and anyone who would like to share something with a receptive audience are welcomed to do so. You can learn more about The Living Room Open Mic Nite Series by Exploring their Facebook Page at www.facebook.com/OpenMicAtTheLivingRoom.

In addition to the Open Mic Nites presented at The Living Room, the venue also holds a Gallery which presents the work of visual artists from around the area. Their current exhibit is titled, “Music and Album Art” which features the work of local artists will continue to be on display until March 26th. Their next exhibitions will be held in April featuring several artists whose names are yet to be announced which will be followed by their next group exhibition in May titled, “Art-ology.” Please contact the gallery’s curator, Shane Izykowski, at 570-856-1001 for more information.

The Living Room is located on Main Street in Stroudsburg, PA next to The Sherman Theater who owns the building. The Living Room is a non-profit artspace and community hub featuring live music, performance, and other events in an intimate setting at affordable prices. Please Explore The Living Room Facebook Page at www.facebook.com/pages/The-Living-Room/123978921059378 for more information on The Living Room, all they have to offer, and how to be a part of it all.
Posted by Unknown at 4:57 PM