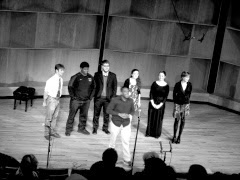 The East Stroudsburg University (ESU) of PA Vocal Performing Arts Organization held their 1st Annual Spring Talent Show on Friday March 7th in the campus’ Fine and Performing Arts Center. The evening featured a number of students whose talents ranged from music to dance, from hip hop to baton twirling, and so forth. The event offered a wonderful opportunity to partake of the talent dwelling among the campus’ population made even more endearing as the love of each performer for his/her aspirations became inspirationally evident during their time upon the stage.

I arrived late to the event and missed the opening performance given by Victoria Oberdick and Mitch Mikuchonis who (according to the program) was scheduled to sing “Say Something” by A Great Big World, but I managed to enter the hall as David Yablonski performing a selection from the musical “Carousel” titled, “You’ll Never Walk Alone” as accompanied by Chris Henry on piano. The piece was well received by the audience who appreciated the precision of his voice. He was followed by Becky Roeber and Eric Baum who sang the song titled, “Love is an Open Door” from “Frozen” whose musical interactions with one another brought a smile to many of the plentiful faces which were present during the event.

They were followed by Marcus Howard who performed the song titled, “Love’s Divine” written by Seal as accompanied by Chris Henry on piano. Mr. Howard’s interpretation of the piece brought out its intricate beauty. As Mr. Howard complete his performance, Becky Roeber returned to sing the song titled, “With You” from “Ghost the Musical” giving it a haunting quality. She was followed by Rashaad “Sugar Prince” Taylor who moved across the stage as he performed the Hip Hop composition written by B2K and P. Diddy titled, “Bump, Bump, Bump.” An intermission ensued after his performance in which those who participated in the show came upon the stage to sing the “Happy Birthday Song” to one of the Audience members.

As the intermission concluded, the band called, “The Northern Revival” consisting of Gage Hojnowski and Eric Kump on Guitars, Brandon Broschart on Bass Guitar, and Johnny Herb on Drums. Together, they performed the songs titled, “Green Onions” and “Phatophobia” which proved to be very entertaining to the audience. They were followed by Poet Mason Buskirk who recited his work titled, “Whispers” which had a quieting effect upon the gathering. Mason was followed by a band named, “Valentina” who consisted of Kelly Keegan and Shara Tallada on vocals along with two guitarist who were listed on the program but only one was seen on stage. Their names were Brian Roder and Kevin Juchno and it is unknown to me which of the men appeared. In any case, the group performed the songs titled, “We Can’t Stop” by Miley Cyrus and “We are Young” by the band Fun. The voices of the singers were as powerful as they were hypnotic as their rendition was complimented by the guitarist who played along with them.

Valentina’s set gave way to the presence of Alize Marrero who performed a dance routine to the song titled, “Single Ladies” sung by Beyonce. Her movements gave the song a degree of sensuality that delighted the members of the audience. Those who experienced the final steps of her performance barely caught their breathes as she walked off the stage as Melissa Valentovic entered with batons in hand which she began to twirl amazing those who viewed her with open mouths as her sense of precision astounded them. Her performance brought about the conclusion of the program as the member of the ESU Vocal Performing Arts Organization presented themselves on stage in order to share their appreciation to the talent and those who came to be entertained by them before bidding everyone a fare thee well. You’ll be able to see more photographs taken during The East Stroudsburg University of PA Vocal Performing Arts Organization held their 1st Annual Spring Talent Show in The ESU 2014 Gallery at www.facebook.com/media/set/?set=a.10152286011965421.1073741883.636000420&type=1.

The show provided the many who attended the program an entertaining evening on campus with much of the talent proving to be very impressive. It would be interesting to see where the creative interests of many of these students will lead them as they continue and complete their educational years at the university. Time will tell of course and I’m one of many who viewed the performances who are eager to find out.

The Vocal Performing Arts Organization at East Stroudsburg University of PA is a student organization who wishes to increase awareness of vocal performing arts on campus as well as giving back to the community the gift of music. They offer a wide array of opportunities through their many programs including concert choirs, select ensembles, musical theater, individual student recitals, and more. You can learn more about The ESU Vocal Performing Arts Organization by exploring their Facebook Page at www.facebook.com/pages/ESU-Vocal-Performing-Arts/103816162994926.
Posted by Unknown at 12:13 PM