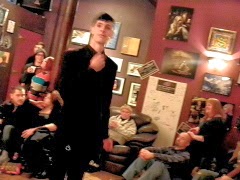 As the new sun from the semi annual Daylight Savings Time ritual shone brightly on an unseasonably warm winter’s day, I arrived at The Sherman Theater’s Living Room in Stroudsburg, PA for their weekly Open Mic Nite Series on Sunday March 9th. Although the doors were open, the day’s diurnal temperatures bade me to linger outside a little longer than usual to enjoy the climatic conditions. Musician were playing music on the sidewalk while others were chatting away remarking how good it was to see one another without the aid of artificial light.

As the time of 6:30pm came nearer, I did eventually enter the building to find many of the denizens quickly preparing to either perform or partake of the performances that were to take place that evening. The designated time arrived and those carrying a song, a poem, or even a play in their heart lined up to place their name upon the sign in list to make their creative desires known to those who announced whose turn it was to bless the mic. A great deal of excitement ensued as the list filled to its capacity in a matter of minutes.

The evening’s festivities began as the 7pm hour arrived and the host for the event, Jessie Roth (aka JR), took the stage to welcome the many whose awesome presence reflected the magnificence the weekly event has become. She then started off the event with some poetry along with some words lamenting the lost of the hour’s sleep many were sorry to experience through its departure due to the Day Light Saving Time Ritual. Although I was very appreciative for the extra beams of light that bathed every step I took while exploring the pathways leading to homes outside of the house where I live, I kept my differing views to myself. It was soon after these welcoming words and poetry was the first performer upon the list was announced.

Kes took the stage with his guitar in hand and sat upon a chair to share his music with the gathering. His songs satisfied the audience’s anticipations regarding what another night at the venue would offer as they quickly were enlivened by his music. Kes has performed many times before and was one of the featured performers during an Open Mic All Star show at The Living Room. His familiar presence inspired many to sing along with him as he presented a number of original songs and cover tunes for them to enjoy. Kes was followed by a performance by The Da Da Dum Theatre.

The production of the week’s installment of The Da Da Dum Theatre featured Theresa Ratliff of Woodrow and C - Rock in a play titled, “Not A Good Morning” written by Paul Adam Smeltz (Yeah, That’s me). It was a comedy about a Cereal Killer and generated a few chuckles. The production was followed by a performance by electric guitarist David Pugh who has frequented the stage many time creating a mood with his instrument that flowed from the conscious to the mesmeric dimensions of the audiences’ mind. He was followed by the duo known as Woodrow.

Woodrow www.facebook.com/wearewoodrow will be the opening act for the Rick Springfield Concert scheduled to take place at The Sherman Theater located in Stroudsburg, PA on Friday March 28th and, like Kes, was one of the featured performers during an Open Mic All Star show at The Living Room. The duo consists of Theresa Ratliff on vocals and Brian Bramkamp on vocals and guitar. They performed a number of songs dating back to the 1980s in preparation for their March 28th performance which included The Men at Work’s song titled, “Down Under” from their 1981 “Business As Usual” Album and Bruce Springsteen’s “Dancing in The Dark” (sung by Brian) from his 1984 “Born in the U.S.A.” album. Their performance brought new life to the songs they sang inspiring many who lived during the times they first appeared on the radio to sing along to the lyrics they still remembered.

Woodrow was followed by Dee “Songbird” Allen who shared she was scouted by a record company during a recent Open Mic Nite performance to which the audience rendered their heartfelt hopes that a great number of wonderful musical opportunities will come her way as a result of the experience. She then continued her time before the mic by sitting down and taking her guitar in hand to perform a number of songs in a manner to give the hopes the audience had for her success in a recording career a definitive tangibility. She was followed by Theomar Chakey Francois who had returned to the venue after a considerable absence from it and whose songs brought a quite joy to those who were reacquainted to his talents.

Theomar was followed by Jesse Morales whose energetic approach to his music never fails to enliven those who hear him. This night was no exception as he began his set with a ukulele and later played a guitar to complete his performance. A break ensued after Jesse’s set in which the host, Jessie Roth (aka JR), announced the Open Mic Nite event was looking for people to help share the duties of co hosting the series and a scavenger hunt was being planned to determine who would be the person chosen. The promise of more details about the process was made as an air of excitement filled the room. It was also announced there was an call for an early Summer made which delighted the audience immensely. As the break concluded, the audience prepared themselves for more performances that were to come.

C - Rock and his electric guitar came upon the stage to bless the mic with some original songs he composed. Many spoke of relationships and life effecting experiences along with the high hopes they possessed. His words entreated the crowd to listen more intently as they symbiotically sensed an innate truth about themselves that would be revealed in the hearing leading to a greater understanding of all that had gone before them and what is yet to come. C - Rock was followed by a poet known as “Max” whose words spoke softly the language of the heart allowing it to hear its own murmuring whispers and translating its utterances so the ears of every listener could understand.

Max was followed by Dedzik www.facebook.com/TwinDevilDedzik whose hard core performance created a contrast to all that came before allowing the audience to explore the deeper and darker realms of their existence. The edge of his songs easily cut themselves through to the inner psyche of those whose droplets of blood shown like a beacon for the thoughts they wished to contain but yearned to set free among the denizens of the world. Dedzik was followed by Michael “Mabus” Bailey who was accompanied by Kid Marvel who, together, served a cuisine of Hip Hop that satisfied the palate of those who consumed every utterance as they bopped their heads and shaped their hands into the symbols of the streets while partaking of the flavor of every song. The two men are part of the Hip Hop Group known as Area 51 and were, like Kes and Woodrow, were featured among those who performed during an Open Mic All Star show at The Living Room.

Mabus and Kid Marvel were followed by guitarist Justin O’Neil Rosario whose powerfully delivered songs reached into the essence of hear listener to engrave the truth of each lyric into their eternal being. Justin was the final name upon the list of performers who were to appear upon The Living Room stage. However, there was time left for those who placed their names and hopes upon the waiting list and they were now able to share their talents with the gathering.

The first who took the mic at this time was Vid Ryan who shared a poem he read from his cell phone that moved the audience through it‘s use of language and imagry. He was followed by Mc Chicken Nugget (aka Amy Burawski) who has read her work many times before with a voice filled with a beauty that adorned the dreams it and her work inspired. She was followed by Bradley Mc Cool who shared a number of his thoughts on forgiveness and judgmental attitudes which led many to contemplate his thoughts with wonderment.

Bradley Mc Cool was followed by Melissa Johnson whose clarion voice had not been heard in The Living Room for quite some time due to a feeling of self consciousness she experienced during an earlier Open Mic Nite. However, with the aid of her friend Rachel Burke who sat on the floor by her side, her stunning voice broke through the barriers that held it tight and flowed through the room and the heart of all it touched. She sang a number of song preciously recorded by other artists but her rendition quickly led the mind to forgetfulness as their version was wiped away by the more precise and harmonically innate one Ms. Johnson transcribed.
There was a pause among those who listened to Ms. Johnson after she completed her set as it to allow its cadence to fully absorb into their being before coming back from the musical world she created for them. But, the applause eventually came and it was then time for C. O. G. to perform. A number of songs left his lips and guitar that spoke of life in the plain speaking words that could only be said in the genre known as folk music. Their truth rang true and simple and, as he has demonstrated so many times in the past, C. O. G. gave the perfect voice to the understanding he musically conveyed as his performance concluded those for the evening.

It was at this time those who shared the experience of another evening at The Living Room together relayed their goodbyes to one another. The air outside the venue maintained some of its warmth and several chose to walk while exploring the insights they gained during their experience that evening. Vernal promises were made to their friends and to themselves to return to the venue the following week to partake and/or participate in the event and to dwell once again in the camaraderie that is found there. And, many will keep that promise and be enriched by it. You’ll be able to find more photographs taken during the Sunday March 9th Open Mic Nite in The Living Room 2014 Gallery Part 2 at www.facebook.com/media/set/?set=a.10152275669355421.1073741879.636000420&type=1.

The next installment of the Living Room Open Mic Nite Series will take place on Sunday March 16th beginning at 7pm with sign ins beginning at 6:30pm. Musicians, poets, writers, and anyone who would like to share something with an audience are welcomed to do so. You can learn more about The Living Room Open Mic Nite Series by Exploring their Facebook Page at www.facebook.com/OpenMicAtTheLivingRoom.

In addition to the Open Mic Nites presented at The Living Room, the venue also holds a Gallery which presents the work of visual artists from around the area. Their current exhibit is titled, “Music and Album Art” which features the work of local artists will continue to be on display until March 26th. Their next exhibitions will be held in April featuring several artists whose names are yet to be announced followed by their next group exhibition in May titled, “Art-ology.” Please contact the gallery’s curator, Shane Izykowski, at 570-856-1001 for more information.

The Living Room is located on Main Street in Stroudsburg, PA next to The Sherman Theater who owns the building. The Living Room is a non-profit artspace and community hub featuring live music, performance, and other events in an intimate setting at affordable prices. Please Explore The Living Room Facebook Page at www.facebook.com/pages/The-Living-Room/123978921059378 for more information on The Living Room, all they have to offer, and how to be a part of it all.
Posted by Unknown at 12:21 PM