A House Full of Funn Folk 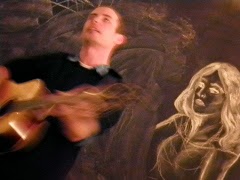 A DIY (Do It Yourself) Folk Show was presented on Friday March 14th in The Funn House which is the apartment of Eric Funn located in Stroudsburg, PA. The chairs, tables, art, and other household fixtures placed around the apartment gave the dwelling a relaxed countenance which allowed those who entered to place the cares and concerns accumulated by the days existence at its front door. There was a delay in regards to beginning the show due to transportation issues involving one of the performers but this pause provided an opportunity for those who arrived to absorb more thoroughly the welcoming atmosphere and partake of the delicious soup that was prepared for the gathering.

After some time had passed, the musicians arrived and the company of friends who came to partake of the evening’s show moved into the performance area. The large number of guests were greeted by a welcoming scene adorned with lights lining portions of the ceiling, an assortment of plants, and a blackboard filled with chalk drawn art which included some thoughtful words along with a depiction of a loving spirit in the guise of a woman whose presence severed to overlook and guide the musicians and poets as they abstracted their loving offerings to the gathering from their spirit. Many among the gathering were inspired to take up some of the pieces of chalk that was made available in order to add their creative talents to the backdrop as the musicians prepared their instruments, voices, and spirits for their performances.

As the final touches of the pieces that were drawn upon the blackboard were made and compliments upon the work was received, Eric and his guitar took the stage to welcomed those who arrived to the show. He was then joined by The Sunland Singers who consisted of Chris Cicala on guitar, Renee De Moonunit on drums, Katherine Freeman on ukulele, and Zeke Katz on a variety of instruments. Together they sang a number of simple yet well constructed songs each with its own set of intricacies that gave a delightful substance and dimensionality to them. This was further enhanced by the joyous application of layers of voices and the subtle instrumental variations that added to the melodic template of the compositions. The Sunland Singers ended their set with Eric’s signature song titled, “Oh Shit. I’m a Fuck Up” which transposed an apparently singular experience into one shared by the audience. You can learn more about The Sunland Singers and their songs by exploring their Facebook Page at www.facebook.com/sunlandsingers.

A break ensued after the performance in which a great number of conversations filled the air. It was during this time did a member of the gathering known as “Ghyp: See” (pronounced gypsy) shared some spoken word poetry that captivated all who were present. It was soon after this poetic interlude did Poet/folk singer Greg McKillop take the stage with his guitar. Greg lives in Portland, ME and had traveled a great distance in order to appear at The Funn House. His arrival soon proved to be one worth waiting for as he powerfully performed one song from his outstanding repertoire after another mingling several of them with some vocalizations that created an orchestral effect while others created another language that spoke directly to the imagination of the listener without the mediary of words. In addition to his songs, Greg shared some of his poetry with the gathering which moved the soul of those who were touched by it to great effect. You can learn more about Greg McKillop and his songs by exploring his Facebook Page at www.facebook.com/GregoryMcKillop.

After Greg McKillop left the stage and some time expired to be filled with conversations about his performance, Cara Cara took the stage and sat upon the floors with her guitar to sing her beautifully crafted songs through her hauntingly mesmeric voice. The majority of her compositions were short in their duration with many ending abruptly allowing those who listened intently to each lyric spoken and felt to complete the songs as their continuing transcendence was sung to them by their soul. A spirit surrounded the audience as she shared her muse with them and a oneness occurred uncommon in many performance settings. You can learn more about Cara Cara and her music by exploring her Facebook Page at www.facebook.com/caracaramusic?sk=app_2405167945.

As Cara Cara rose after the completion of her set and those who were touched by the experience were afforded time to explore its intricacies with their conscious thoughts, it was time for the newly formed group known as “Sick Antelope Party” to prance upon the stage. The group consisted of Amy Burawski, Vid Ryan, and Kes Lyman who each has gained a great deal of renown individually during The Sherman Theater’s Living Room’s weekly Open Mic Nite Series and decided to combine their talents five days prior to the DIY Folk Show. Poetry, music, and art danced with one another as a series of performance art pieces were sewn together with a loving thread that gently stitched the fabric of the room’s population into one seamless garment that could be worn as a quilt, a sweater, or as woolen headwear with antlers upon it. You can learn more about Sick Antelope Party by exploring their Facebook Page at www.facebook.com/sickantelopeparty.

As the Sick Antelope Party completed their performance, many sat back to partake of some very relaxed conversations that lasted into the wee hours of the morning. It was during this time those who shared their words not only relived their experiences during the show with one another but also partook of the gracious opportunity to learn more about and from those they shared the event with. There had been shows presented at The Funn House prior to this event and there are more yet are likely to come and those who found themselves relaying their farewells to their friends soon found themselves eagerly awaiting for news when another show was scheduled. You can find more photographs taken during the DIY Folk Show in the House Music 2014 at www.facebook.com/media/set/?set=a.10152300688790421.1073741887.636000420&type=1.
Posted by Unknown at 4:39 PM