An Open Mic Glows with Brooklyn 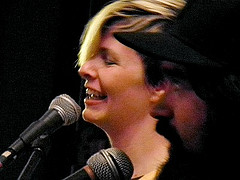 The Living Room in Stroudsburg, PA presented another installment of their weekly Open Mic Nite Series on Sunday November 25th. With a few exceptions, this edition of the series proved to be dominated by guitarists who played with a joyful abandonment one feels when exploring their talent in an encouraging environment filled with friends. In the midst of those who came to share their love for the performing arts, The Living Room presented Dan and Rachel who traveled from Brooklyn, NY to partake of the evening’s event as its special guest.

The evening began with a performance by host Billy Mack who cordially welcomed the sizable gathering before he began sharing some songs on his Guitar. He was followed by guitarist Matt B. whose electric riffs moved the room with each cord while eliciting a smile to those who recognized Darth Vader’s them from the Star Wars films as part of his repertoire. Matt was followed by guitarist Henry Schecker whose powerful voice and determined strumming of his instrument created an echo within each listener embracing each note they experienced. After his performance was completed, a guitarist by the stage name of Sirhan Sirhan played a number of tunes with the subtle gentleness of an assassin contemplating the opportune time to strike at the heart of each listener so it will beat again with a new awareness.

After the three guitarists completed their sets, the evening’s special guest, Dan and Rachel Costello, took their place with Dan performing on guitar and Rachel on keyboard and percussion. From the very first moments of their performance one was inspired to recall the sensations one felt while listening to the soundtrack of a Quentin Tarantino film. Their music slapped and tickled their listeners until they were giddy with the desire to experience more of the delightful sounds the musicians cheerfully employed upon them. In other words, they were effing cool.

As mentioned earlier, Rachel and Dan is from the Brooklyn, NY area and consider themselves musically influenced by a variety of sources ranging from Pete Seager to Kermit The Frog. There is often a bizarre element to the compositions they choose to share which include songs about bananas, poison, and Chien de Merde (French Translation). All this was evident throughout their performance at The Living Room and was embraced by all who were fortunate enough to partake of their perspectives. They are currently promoting their second album titled, “Plus one” which is available on cassette from Kale Records. You can learn more about Dan and Rachel by exploring their Facebook Page at www.facebook.com/danandrachelmusic?ref=ts&fref=ts.

After Rachel and Dan concluded their performance, a duo of local musicians Desmond Lyons and Topher Brown took the stage under the name of “Children’s Syrup.” Their music added an additional element of rock combined with a nice amount of grunge reminding one of the early years of the band Nirvana. They were followed by solo guitarist Rick Delgado whose soothing music electrified his listeners with the depth of his lyrics. Rick was followed by Dave Pugh whose electric guitar moved the audience from one riff to another leaving each person breathless in their melodic journeys.

Dave was followed by a group known as “Hxlly’s Wxrld” consisting of Holly, DJ Ashley, and Crab Boi. Their performance art presentation of Rap/Hip Hop was filled with spontaneity and laughter infecting those who explored each subtle subtext with a smile while the perplexity found upon the faces of others who found themselves lost in the performance enhanced the enjoy ability of the presentation further. In other words, it was fun.

“Hxlly’s Wxrld” was followed by a guitarist known as C. O. G. who was accompanied by another guitarist whose name I regretfully neglected to obtain for this article. Together they played a series of songs with many written by Bob Dylan. Their set brought the evening’s Open Mic Nite to an end as each attendee shared a mellow appreciation for all that they had experienced that night. As with all previous such gatherings at The Living Room, the farewells to friends and their subsequent departure from the venue was accompanied by the anticipation of returning the following week for a similar experience. You’ll be able to find more photographs taken during the Sunday November 25th Open Mic Nite in The Living Room 2012 (Part 2) Gallery at www.facebook.com/media/set/?set=a.10151242474950421.513481.636000420&type=1.

The Living Room Open Mic Nite series will continue on Sunday December 2nd beginning at 7pm (sign up begins at 6:30pm). Writers and poets whose work will appear in the upcoming issue of The Forwardian Arts Society’s Literary and Art Magazine, “Forwardian” will be among the attendees to share their words during the Sunday December 9th event. And, as always, musicians, poets, writers, and anyone who would like to share something with an audience are welcomed to do so. You can learn more about The Living Room Open Mic Nite Series by Exploring their facebook Page at www.facebook.com/OpenMicAtTheLivingRoom.

In addition to the Open Mic Nites presented at The Living Room, the venue also holds a Gallery which will present an exhibition featuring the work of Martelle, Kayla O'Connor, Abigail Braman, and Kyle Kuczma beginning with an Artists’ Reception on Saturday December 1st at 6pm. The event will include special guests Chris Ruggiero and his One Man Variety along with The Ajax Rasputin's Leviathan Variety Hour. There will also be a “Holiday Mistletoe Kissing Booth” available throughout the evening. The exhibition continues until December 30th.

The Living Room opened in April of 2012 and is located on Main Street in Stroudsburg, PA next to The Sherman Theater who owns the building. The Living Room is organized by members if the community who include Shane Izykowski, Martelle Jones, Elisa Byrne, Tom LeFevre, Darlene Farris Labar, Sarah Bouma, Toby Sabatine, and Billy Mack. Please Explore The Living Room Facebook Page at www.facebook.com/pages/The-Living-Room/123978921059378 for more information on The Living Room, all they have to offer, and how to be a part of it all.
Posted by Unknown at 12:18 PM No comments:

A Backstreet Paved with Glass 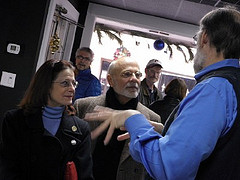 On a chilled November day, the denizens of the Northeast PA area were reminded of the approaching winter season by the intermittent appearance of snow flakes floating upon their cars and persons. The flurried activity of the meteorological invasion was echoed by the excitement within The Backstreet Studio and Art Gallerie in Stroudsburg, PA who held an Artist’s Reception on Saturday November 24th for their exhibition titled, “Everyday Elegance - in Glass” featuring the work of glass artist Roy Gruver. Congenial conversations abounded as explorations delving into the delicate intricacies of each piece who awaited to be discovered generated a warmth among the sizable number of art lovers who attended the event.

The work consisted of a variety of kiln formed and fused glass pieces ranging from decorative shapes to functional items. All were beautifully crafted and quite pleasing to the eye. Their energies exuded a great sense of joy which was present during the creation process as evident by insights the artist shared with those who sought to learn more about his approach to the medium. These insights enhanced the appreciation of the work entreating each to explore the pieces further utilizing the newly gained understanding of their essence.

Mr. Gruver works out of The Studio at Bierys Bridge in Bethlehem, PA and teaches his craft to students eager to learn from his skill at The Banana Factory which is also located in Bethlehem, PA. You can learn more about Roy Gruver and his work by contacting him at Gruverglass@gmail.com.

The studio and art gallery opened its doors to the public in April of 2012 and is owned by Andrea Robbins Rimberg. Prior to the establishment’s opening, Ms. Rimberg became well known for her creativity as many of her pieces were and continues to be presented in prestigious museums throughout the United States. She is also know for her undying dedication to the arts which she utilizes her exuberant energies to promote at every opportunity. Among her many positions serving in organizations and groups relating to the arts, she is the president of the Pocono Arts Council and the Arts and Photography Director of The Forwardian Arts Society literary and Art magazine titled, “Forwardian.” You can learn more about The Backstreet Studio and Art Gallerie and all it offers by exploring their Facebook Page at www.facebook.com/BackstreetStudioAndArtGallerie.
Posted by Unknown at 12:16 PM No comments: