A Passage of Time at The PCT 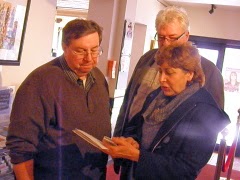 The Gallery at The Pocono Community Theater and Cultural Center in East Stroudsburg, PA held an Artist’s Reception on Saturday March 8th for their exhibition titled, “Yesterday and Today” featuring the work of Jim Smeltz throughout their entire gallery. This is seldom done as the gallery is usually split between two locations which are the center’s front gallery located in their lobby near their 1st screening room and the back gallery located along the wall leading to their 2nd and 3rd theaters. However, the plentiful work Mr. Smeltz has created during his many years of manifesting images and teaching others how to pursue their desire to place their imaginings on canvas has afforded the gallery an opportunity to allow its patrons to focus on a single vision thus creating a visual narrative throughout their aesthetic explorations.

As the exhibit’s title suggests, a variety of depictions of buildings found throughout the gallery allowed the viewer to take a nostalgic journey into yesterday while those of floral arrangements centered the viewer in the beauty of the here and now. However, the images of buildings of a bygone time could lead one to reflect upon what the structure and the area which it once occupied is like today while a grouping of flowers may bring back memories to when one met someone they were fond enough of to offer a bouquet. While exploring the work, we soon realize that the time presented in the paintings created by Mr. Smeltz is relied upon our perceptions and the gentleness of the exhibit allows us to take some time to soften our thoughts to absorb all the variations of what we perceive from the images we are touched by.

The reception was a well attended one as Mr. Smeltz has garnered a number of admirers throughout his years in the local art scene. Students who have become artists of some renown along with those who never fail to find something of themselves in his work came to the venue to partake of his visual talents. The work presented at The Gallery at The Pocono Community Theater and Cultural Center held no disappointments for those who attended the reception as it not only satisfied those who found a comfort in the images but also an opportunity to discover something new about themselves. You’ll be able to find more photographs taken during the reception in The Pocono Community Theater (PCT) 2014 Gallery at www.facebook.com/media/set/?set=a.10152288720240421.1073741884.636000420&type=1.

The Gallery at The Pocono Community Theater and Cultural Center in East Stroudsburg, PA will continue to display their exhibition titled, “Yesterday and Today” featuring the work of Jim Smeltz until April 27th. Their next exhibition will feature the works of Chris Sparling which will be shown in their Front Gallery and Joni Benintende in their Hall gallery. An Artists’ Reception for the exhibit is tentatively scheduled for Saturday May 3rd beginning at 1pm and the exhibit will continue to be on display until June 29th.

In addition to hosting art exhibits, The Pocono Community Theater and Cultural Center presents a variety of films both popularly current as well revivals of those films released in the past. They also host special events such as their Book Club which explore novels that have been adapted to the screen and are currently being shown in the theater. Please Explore The Pocono Community Theater Facebook Page at www.facebook.com/PoconoCommunityTheater?ref=ts&fref=ts for more information.
Posted by Unknown at 12:14 PM