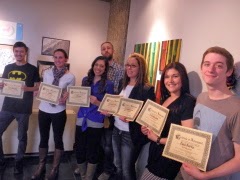 The East Stroudsburg University of PA (ESU) Art Association held an Artists’ Reception on Wednesday March 26th for their Annual Student Juried Art Exhibition presented in the Madelon Powers Gallery which is located within the campus’ Fine and Performing Arts Building. Participation in the exhibit was open to students of all majors attending East Stroudsburg University which is designed to showcase and reward the creative character of the campus’ population. Rodney O’Dell Davis served as Juror for the exhibition.

As each academic year passes at the university, the exuberant creativity embodied in the youthful spirit eager to explore and transcend the boundaries of the artistic disciplines the individual student embraces comes to the fore as their endeavors are displayed during the school’s annual exhibit. The work presented at the Madelon Powers Gallery remains consistent with this youthful spirit as the exceptional work displayed upon its walls demonstrates a great deal of talent combined with a vibrancy of limitless imaginations and a willingness to conduct aesthetic experiments to discover what the medium chosen by the artist can convey through its properties. The Reception was a very well attended as family, friends, and art lovers filled the space to capacity in order to explore the exhibit’s offerings.

Along with the artistic endeavors presented in the juried exhibition, a section of the gallery was dedicated to the skills of those who participated in the Art Association’s recent Annual 12 Hour Comic-Thon which took place on Saturday March 7th. The workshop allowed those students who seek to either define or refine their skills as cartoonist to partake of an opportunity to create comic books and graphic novels reflecting the images and characters they meet in their adventurous thoughts during the marathon session. The workshop was led by Prof. David Mazure and the works the students produced proved to be interesting literary gifts from which many who attended the reception joyfully perused as they engaged in conversations the exhibit and the content of the books inspired.

In addition to the work being presented in the main gallery, an exhibit of plates were on display in the venue’s upstairs gallery reflecting upon the ESU Dinner Party held in March of 2010 which was inspired by Judy Chicago as it celebrated women in history. The ceramic workmanship of the plates went beyond the ordinary functionality or decorative qualities of the dinnerware to depict the elements embodied in the desires of women to gain an equality often denied them in a patriarchal culture. The work was very well done and served a thoughtful cuisine of historic ideas relevant in any age when women and their rights to equality needs to be addressed.

The excellence of the work displayed throughout the entire gallery is well worth making a trip up to The University’s Fine and Performing Arts Building to explore. Many of the pieces serve to delight the eye with its imaginative imagery while other offered insights expanding one’s perceptions of the ordinary occurrences one encounters daily. You’ll find more photographs taken during the ESU Artists’ Reception in The ESU 2014 Gallery at www.facebook.com/media/set/?set=a.10152286011965421.1073741883.636000420&type=1.

The ESU Art Association is collegiate club designed to create an opportunity for students to explore the myriad aspects of the visual arts with their peers. As with all such clubs, this is sometimes done with great degree of diligence while other times the approach contains the appropriate amount of silliness found when friends get together. In either case, the ESU Art Association provides students with a love for the arts to share the heart of one another. Its president is Lindsay Godin, its Vice President is Aisha George, its Secretary is David Canady, and it’s Treasurer is Chris Hingley. Prof. David Mazure serves as their faculty advisor. You can learn more about the ESU Art Association from their Facebook Page at www.facebook.com/groups/2208607072/?ref=ts&fref=ts.

The ESU Art Department and Art Association Student Juried Art Exhibit will continue to be on display at The Madelon Powers Gallery which is located in The Fine and Performing Arts Building on the ESU Campus until April 18th. The exhibit was sponsored by The Pocono Chapter of the Pennsylvania Guild of Craftsmen with support being received by Music in the Mountains, Siamsa Irish Pub, and The Sarah Street Grill. The final exhibition presented during the 2014 Spring Semester by The East Stroudsburg University of PA Art Department will be their Senior Seminar and Portfolio in Art Student Exhibition with an Artists’ Reception scheduled for Wednesday April 23rd beginning at 4pm. The exhibition will continue to be on display until May 6th. Please contact The East Stroudsburg University Art Department at Esuarts@esu.edu for more information.
Posted by Unknown at 1:02 PM