Laughter Among The Living 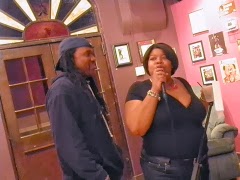 On a chilled wintry night made gloomier by the constant references to the climatic conditions of the area by a multitude of sources, a beacon of laughter shown throughout the town of Stroudsburg, PA as The Sherman Theater’s Living Room presented a Comedy and Improv Open Mic on Wednesday March 5th which allowed the thoughts of those who entered to be warmed by the humor and camaraderie they discovered there. The event was hosted by Kiss This Entertainment who offered an opportunity to everyone who walked through the door to share their humorous stories or perceptions on life along with any other talents they had with a receptive crowd. The event is relatively new to the area so the number of people present was a modest amount, but the laughter the evening inspired created a presence which transcended the group that was assembled.

The beginning of the event was delayed due to the late arrival of several comedians who were expected to perform. However, as soon as the evening’s host, Lakisha, took the stage and began to share her brand of humor, the first peals of laughter she extracted from the audience while exploring the qualities of Craig’s List and parts of the female anatomy proved to be a moment worth the wait. Lakisha’s routine was followed by her introduction of the first comedian to bless the mic with his perceptions and recollections named, “Dan” who traveled from Whitehall, PA to be a part of the festivities. His routine was well received by the audience who found his reflection very amusing.

Dan was followed upon the stage by Paul Adam Smeltz (yeah, that’s me) who, in spite of his jokes earning him and the title, “The Scourge of The Family Get Together,” decided to try out some of his jokes on the group. The gathering graciously laughed at his attempts to which he ended his routine and got off the mic while the getting was good. However, a skit Paul had written titled, “Not A Good Morning” was performed by Dan (who appeared earlier) and a member of the audience known as “Barbara 2.” It, too, was graciously received.

Paul (yeah, still me) was followed a comedian named, “Tracy” whose presence immediately brought about a great deal of laughter and touched upon a variety of topics ranging from child rearing to politics. As Tracy completed his set, a new comer to the gathering named, “Keino” took the stage to share his humor with the crowd. His collection of jokes were well received and proved to be an interesting contrast to the monologue approach the majority of the comedians utilized in their routines. Keino was followed by Mike who also served as the evening’s bar tender and served up a routine that further intoxicated the crowd with laughter.

Mike was followed by Jean who is associated with www.WakeUpNow.com which is a direct sales technology company. Jean spent his time on the mic sharing news of a Power of WUN (Wake Up Now) Business Conference that is scheduled to take place Saturday March 8th at The Lounge in Bartonsville, PA www.facebook.com/LoungeBartonsville?ref=br_tf beginning at 2pm. The evening’s host, Lakisha, took the stage to bid farewell to the audience as Jean left the stage until a young man named, “Casford” entered the building who seemed to be on his way to another a joining room. Lakisha entreated him to come upon the stage and share his words with the gathering which he relented to do so by answering questions posed to him by the audience.

As Casford left the stage, Keino returned to bless the mic and those who heard him with a song. It was after this musical interlude did Lakisha take the stage to conclude the program and share news of upcoming events presented by Kiss This Entertainment with the help of Barbara 2. Those who attended the event found it to be a good dose of fun and news that it is a weekly event gladdened the heart as many wished to come back to repeat the experience. You’ll be able to find more photographs taken during the Kiss This Entertainment’s Comedy and Improv Open Mic in The Living Room 2014 Gallery Part 2 at www.facebook.com/media/set/?set=a.10152275669355421.1073741879.636000420&type=1.

Besides housing the Kiss This Entertainment’s weekly Comedy and Improv Open Mic event, The Sherman Theater’s Living Room in Stroudsburg, PA is currently presenting an exhibition titled, “Music and Album Art” which will continue to be on display until March 26th. Their next exhibitions will be held in April featuring several artists whose names are yet to be announced followed by their next group exhibition in May titled, “Art-ology.” Other events at The Living Room will include MY SHOW Live featuring King Buffalo on Saturday March 8th, Lionize on Thursday March 13th, Voices That whisper on Saturday March 15th and their weekly Open Mic Nite Series www.facebook.com/OpenMicAtTheLivingRoom?ref=ts&fref=ts which occurs every Sunday Evening beginning at 7pm.

The Living Room is located on Main Street in Stroudsburg, PA next to The Sherman Theater who owns the building. The Living Room is a non-profit artspace and community hub featuring live music, performance, and other events in an intimate setting at affordable prices. Please Explore The Living Room Facebook Page at www.facebook.com/pages/The-Living-Room/123978921059378 for more information on The Living Room, all they have to offer, and how to be a part of it all.
Posted by Unknown at 10:24 AM