Sharing the Faith with Brass 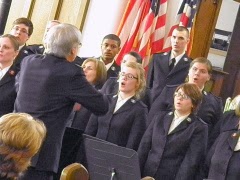 The East Stroudsburg, PA United Methodist Church (ESUMC) presented The Salvation Army’s PenDel Brass, Singers, and Tambrelists who performed a glorious musical program under the Musical Direction of Harold Burgmayer on Saturday March 8th as part of the performers’ 50th Anniversary Concert Series. The segment of the series performed at the church was titled, “We’ve Come This Far by Faith” which featured a number of compositions related to the Christian faith all of which were rendered flawlessly and rose the spirits of everyone who were fortunate enough to experience the sounds that echoed the joyful murmurs of the heart. The sanctuary was filled to capacity as each ear delighted in the music that filled them.

Unfortunately, I arrived late to the concert and did not experience the first moments of the program which included (according to the printed program) a pre concert performance given by the Youth Chorus and the welcoming remarks of Major Jim Fingrich of East Stroudsburg corps of The Salvation Army. However, as I walked into the church during a movement from the orchestra’s performance of a suite composed by Robert Redhead titled, “Shout Salvation,” the musical precision of the piece led me to my seat where I found myself comfortably surrounded by its melodies. The remainder of the program primarily consisted of the Pendel’s Brass Orchestra and the Pendel’s Singers taking turns as the concert’s focal points. The selections presented by Pendel’s Brass Orchestra and the Pendel’s Singers proved to be quite beautiful and touching which was further amplified by the soloists and musical pairings who were featured throughout the program.

The Pendel’s Timbrelists were presented during the concert and their presence created a stir as the beat of their tambourines mimicked that of the pulsating hearts of those who became absorbed by the music of a piece composed by Dean Jones titled, “El is El Senor (He is the Lord)” that accompanied their performance. The colorful ribbons upon their instruments created rainbows as they were sailed through the air by each musician as they allowed the echoing of their deftly delivered taps to realize their full acoustic effects.

A number of selections followed the performance of the Pendel’s Timbrelists until a Devotional along with words of appreciation was given Captain Mike Laro who, along with Debra Laro, served as The Salvation Army Divisional Youth Leaders. Some additional pieces followed his words which included a musical benediction that closed the program which inspired a standing ovation by the many who attended the concert as they were well satisfied by what they had experience. You’ll find more photographs taken during the March 8th Salvation Army’s PenDel We’ve Come This Far by Faith concert performed at The East Stroudsburg, PA United Methodist Church in The Special Events 2014 Gallery at www.facebook.com/media/set/?set=a.10152230295395421.1073741876.636000420&type=1.

The Salvation Army is a national religious organization promoting the percepts of the Christian faith especially in the tenants relating to the promise of a spiritual salvation to those who seek it. The Salvation Army began its ministry in the United States in October 1879 by Lieutenant Eliza Shirley. You can learn more about The East Stroudsburg, PA Chapter of The Salvation Army by exploring their Facebook Page at www.facebook.com/pages/East-Stroudsburg-Salvation-Army/238240569560704.

The East Stroudsburg, PA United Methodist Church (ESUMC) is a religious organization devoted to the Christian faith whose mission is “To Love Jesus Christ and to Share His Love.” They hold three services each Sunday which includes two traditional services and one that is contemporary in nature. Everyone is welcome to participate in their ministry events and worship services. You can learn more about The East Stroudsburg, PA United Methodist Church (ESUMC) by exploring their Facebook Page at www.facebook.com/pages/East-Stroudsburg-United-Methodist-Church/125512147493695.
Posted by Unknown at 12:16 PM