Lounging Around at The Freight Station 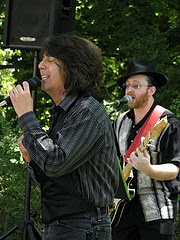 The Jacob Stroud Corporation presented Danny Grae and Robby Kae on Saturday July 30th at The Dreibe Freight Station in Stroudsburg, PA as part of their Music in the Park Series. Numerous fans and well wishers filled the little known McMichaels Park where the train station is presently located along with several individuals who began as passersbies and became listeners as they became drawn in by the musical tones the duo presented. This respectable multitude were treated to a number of tunes performed in a style not unfamiliar to that found in many cabarets and casino lounged environments whose quaintness (in the better sense of the word) entertained them enough to allow them to forego the worries and cares many of us face throughout our weekly ordeals and just have a thoughtless afternoon to enjoy some good music performed well. You’ll find more photographs taken during the concert in the Music in the Park 2011 Gallery at www.facebook.com/forwardian.dude.

Danny Grae’s first major musical influence can be traced back to The “Motown Sound” as he grew up in its place of origin in Detroit, MI. He later performed with his high school choir and performed in all of the school plays for which he was given the “Dramatics Achievement Award.” He later pursued a career in theater but found his true passion was in singing. He then became popular in cabarets but soon discovered a profound love for country which he continues to dedicate the majority of his performances today. Please Explore the Danny Grae Website at www.dannygrae.com to learn more about their musical offerings.

Robby Kae graduated several years ago from East Stroudsburg University of PA and now performs as a Jazz Guitarist throughout the area. However, he is best known for his work in theater as he has performed in several local productions with some impressive acclaim. More information about Robby Kae can be found on his website at www.myspace.com/RobinTheGrey.

The Dreibe Freight Station was built in 1882 and serviced shipments traveling along the New York, Susquehanna and Western Railroad. In now serves as an art gallery to showcase the collections of the Monroe County Historical Association. Special exhibits by local artists are offered throughout the year. Please Explore The Monroe County Historical Society Website www.monroehistorical.org for more information about the Station and to learn more about the history of the area.

The Jacob Stroud Corporation was formed in 1995 in order to revitalize the downtown historical heritage. They continue to establish a healthy downtown environment for residents and visitors to the area. The next performance in their Music in the Park Series will feature The Chris London Band at The Dreibe Freight Station on Saturday August 6th beginning at 12 noon. This will be followed weekly by other musicians. A festival celebrating all things relating to the town of Stroudsburg, PA will take place Saturday September 3rd. The Annual “Stroudfest” event will feature entertainment throughout the day along with opportunities to explore and purchase works created by local artists, artisans, and crafters. Please Explore The Stroudfest Website at www.stroudfest.com for more information. To gain more information about The Jacob Stroud Corporation and all they have to offer the community as well as its visitors, Please Explore their Website at www.stroudsburg.net.
Posted by Unknown at 8:33 PM