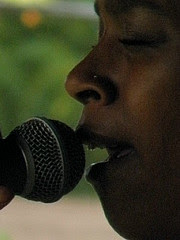 The Presbyterian Church of the Mountain in Delaware Water Gap, PA presented The Najwa Parkins Group as part of their Summer Gazebo Concert Series on Sunday July 17th. The Lazy Summer day proved to be the perfect backdrop of this installment of the weekly series. The Group is new to the Gazebo and it’s frequent attendees but the trio of young musicians soon became one of their favorites.

The Trio consists of Najwa Parkins on Vocals, Luke Brandon on Trumpet, and Ian Hooper on Guitar. The first thing that strikes one (well, those of us who are over 50) is how young theses musicians are. This begins speculation to whether these individuals have enough life experience to perform the songs they placed in their repertoire with any believable feeling. However, while these individual may or may not have lived the life experiences encompassed in the songs, any speculation to whether they could perform them with their truths intact were soon put asunder as the first notes and haunting vocalizations began to echo throughout the grounds.

To say the voice of Najwa Parkins is a captivating one would be a great understatement. It penetrates the soul as the lyrics of her renditions can be seen written on her face. She seems to have the ability to not only reach inside her being to bring out all the nuances of the pieces she performs but she also is able to trigger the eternal memories of all who become spellbound by her. The magic of Ms. Parkins’ vocals were enhanced by the mesmerizing sounds emanating from her cohorts. Luke Brandon and Ian Hooper added a melody to the siren song that led their listeners ashore to their own life’s experiences. You’ll find more photographs taken during the concert at The PCOM Summer Gazebo Concerts 2011 Gallery at www.facebook.com/forwardian.dude.

The next musical performance presented in their Summer Gazebo Concerts Series will be Mark Hamza and the Great Swamp Blues Band on Sunday July 24th beginning at 6pm. The concert is free and open to the public. Please Explore The Presbyterian Church of the Mountain Website www.churchofthemountain.org call 570-476-0345 for more information about the concert and all they have to offer the community.
Posted by Unknown at 3:57 PM