Rupert at The ArtMusic 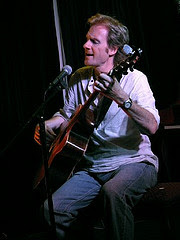 The ArtMusic Coffeehouse in East Stroudsburg, PA presented singer/songwriter Rupert Wates on Friday July 8th. It was a rainy evening and much the surrounding area was recovering from a damaging storm that took place the previous day, but this did not deter the many who attended this evening’s performance. And, what a performance it was as the home of Don and Jan Julia Slepian was filled to near capacity in order to listen to the music shared by their special musical guest.

Rupert Wates was born in London, England and his subtle accent added a charm to the voice of the songs he performed. His vocal charms combined with his deft guitar skills made this ArtMusic concert one of the most memorable in the series. It was a shear delight to hear him play and share the stories associated with many of the tunes.

The range of emotions experienced by the audience as they listened were seen in their eyes as they reflected the joy and woe they have become familiar with throughout their lives. It was as if Mr. Wates was standing at the well of humanity and drawing up the emotions and experiences of mankind to the surface where they could nourish those who partook of them from his vocal and musical instruments. Those who did partake of this nourishment did indeed experience a refreshment as some memories revived a hope that was once lost while others were able to be placed to rest so their devastating effects could no longer determine our future course. You’ll be able to see photographs taken during the concert in The ArtMusic Coffeehouse 2011 Gallery at www.facebook.com/forwardian.dude.

Rupert Wates began his career as a songwriter in 1992 and has written for numerous artists since then. Around 2006, he moved to the United States and performed in numerous venues both large and intimate. He has been nominated and won several awards at festivals and music related organizations in honor of his talents. You can gain more information about Rupert Wates, his music, and where he will be performing in the future from his website at www.rupertwatesmusic.com.

The ArtMusic Coffeehouse is held in the home of Don Slepian and Jan Julia who reside in the borough of East Stroudsburg, PA as part of the Concerts In Your Home Series. A variety of musical forms are presented including folk, jazz, classical, and electronic music. Although the concerts welcomes all who wish to attend, seating is limited as it they take place in a private home. The Next The ArtMusic Coffeehouse Concerts will feature Marc Black on Saturday July 23rd and Jesse Terry on Saturday August 20th both beginning at 8pm. Please Explore The ArtMusic Coffeehouse Website at www.ArtMusicCoffeehouse.com or Call 570-476-6307 for more information and to reserve your seats.
Posted by Unknown at 4:40 PM