Lee Morgan At The Bookhouse 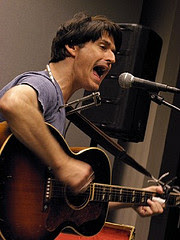 The Eastern Monroe Public Library in Stroudsburg, PA presented singer/song writer Lee Morgan on Friday July 29th as part of their Bookhouse Concert Series. The delightfully gentile atmosphere that dominated the concert was set even before the first notes were played as Lee prepared for his performance while playfully sharing his stories with the audience and answering questions about his work. This help create a mood in which those in attendance almost forgot they were coming out for a concert at the Library but instead coming home to relax in their favorite chair as a much beloved houseguest began to make his welcomed presence known.

However, after all preparations were made, Rob Ramos shared some opening announcements relating to the show and other germane news. Part of this news revealed this was to be the last Bookhouse program he would help the Library present as he shall be moving from the area in the near future. After being an intricate part of the creative community for over 20 years, his considerable contributions in theater, music, and other disciplines will be deeply missed. At this time, I (on behalf of The Forwardian Arts Society) would like to thank Rob Ramos for sharing his talents and wish safe and enriching journeys as he continues going forward toward his creative dreams.

The concert itself consisted of a number of original songs whose accompanying stories furthered the pleasing mood created prior to the official beginning of Lee’s performance. A variety of musical genres were presented which included folk and blues selections as well as compositions from a literary project he and his wife Shelle Sumners are in the process of presenting to the public. All of which brought a sense of joy and thoughtfulness to the ears and heart of the audience enriching their evening at The Eastern Monroe Public Library. You’ll find more photographs in the Music 2011 Gallery at www.facebook.com/forwardian.dude.

The literary project mentioned earlier in this article is a novel written by Lee’s wife (Shelle Sumners) titled, “Grace Grows.” It is designed to allow the reader to add to their literary experience to listen to songs written by Lee Morgan that reveal a depth to one of its main characters not found in the written work alone. You can learn more about the novel by exploring its website at www.gracegrows.com. You can also learn more about Lee Morgan and the music he performs by Exploring his website at www.leemorgan.com.

The Eastern Monroe Public Library is located in Stroudsburg, PA and offers its BookHouse Series to the public providing literary and musical events that are outside of the commercial and literary mainstream. These events are free and open to all who wish to partake of them. Suggestions for future bookhouse performers are always welcomed. Please Explore The Eastern Monroe Public Library website at www.monroepl.org for more information about the bookhouse series and everything they offer the community.
Posted by Unknown at 8:30 PM