Zydeco and Rock N Roll at The Bookhouse 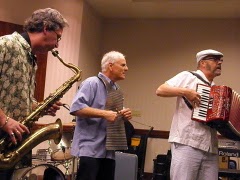 The Eastern Monroe Public Library in Stroudsburg, PA presented Peter Gumbo and The Hot Peppers on Friday July 25th as part of their 2014 Bookhouse Season. A sizable gathering filled the library’s community room as the instruments the musician would employ to bring a joy to their hearts stood patiently in the performance area for them. Conversations were heard throughout the room reflecting an excited anticipation of the evening’s offerings until a quietness fell upon them as the Library’s host, Linnae Cintron, took the stage to share her introductory remarks relating to the event and the library itself.

It was soon after her words concluded did Peter Gumbo and The Hot Peppers take the stage to express their appreciation to the Library and all who had come to hear them play. The trio who performed that evening were a part of a larger six person band titled, “Zydeco-a-Go-Go” www.facebook.com/pages/Zydeco-a-Go-Go/91226005977 and consisted of Pete Gumbo on accordion, piano, and vocals, Bob Holden on Drums and Vocals, and Bobby Michaels on Tenor Saxophone. The group began with their rendition of the Fats Domino’s Classic “Blueberry Hill” which brought an appreciative smile to many in the audience as the fond memories the song inspired could be seen in their eyes.

The performance moved onto more classic rock n roll and blues standards centering around those written by New Orleans composers from the 1950s and 60s. The trio spun each song like a 45rpm with their voices and musical phrasings which many had played upon their favorite record player. The repertoire of songs they presented from this era included a number of sing-along compositions which included an impromptu performance by an audience member who sang the song titled, “Chapel of Love” made famous by the group known as The Dixie Cups in 1964.

Those who joined in the singing of this and other songs found that the recollection of their lyrics brought a reclamation of youth whose sing song memories reflected upon the times they lived when they first heard the tune. Their voices were carried by the emotions they were touched by the joy and the bygone thoughts they seemed to had shared. Some were of the first car they ever drove while others were of the time they shared an ice cream soda with so long ago. Regardless of what memories were brought to the fore, their lingerings were heard in the thoughtful pauses they uttered between each note they sang.

In addition to the memorable tunes they performed from the 50s and 60s, Peter Gumbo and The Hot Peppers also rendered a number of lively Zydeco compositions. These inspired a great deal of toe tapping and hand clapping among the gathering. There were also a number of waltzes in keeping with the musical style that inspired some couples to move from their chairs so they could share a dance with one another. The concert concluded with the Bill Haley and the Comets’ classic “See You later, Alligator.”

However, the audience requested an encore which inspired the musicians to move among the audience who followed them in a joyous parade as they danced and clapped toward the song’s conclusion. A great deal of laughter and memories were shared during the concert whose effect lingered with many long after the very enjoyable performance ended. You’ll find more photographs taken during the concert in The EMPL 2014 Gallery at www.facebook.com/media/set/?set=a.10152258038885421.1073741878.636000420&type=1.

The Eastern Monroe Public Library (aka The Hughes Library) Bookhouse Series takes place in the Edinger Community Room which is located on N. 9th Street (aka route 611) in Stroudsburg, PA. The Hughes Library is the main branch of the Monroe County, PA library system which includes their Pocono Township Branch in Tannersville, PA and their Smithfield’s Branch in Marshalls Creek, PA. The library offers access to numerous books, DVDs, Audio Recordings, and cultural programs free to the public. The library’s BookHouse series is part of its cultural programming designed to provide a venue for literary and musical events which are outside of the commercial and literary mainstream.

The next program in The Eastern Monroe Public Library 2014 Bookhouse Series will feature Mustard’s Retreat www.facebook.com/mustardsretreat on Friday September 19th beginning at 7:30pm with the doors opening at 7pm. Admission to the event is free, but donations would be gratefully accepted. Refreshments will also be available for a small charge. Please Contact Linnae Cintron at 570-421-0800 x28 or explore The Eastern Monroe Public Library Facebook Page at www.facebook.com/EasternMonroePublicLibrary?ref=ts&fref=ts to learn more information about the library, their Bookhouse series, and all the institution has to offer the community.
Posted by Unknown at 2:08 PM