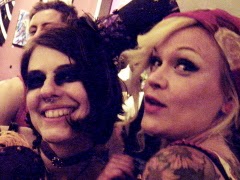 Upon entering the town of Stroudsburg, PA on Saturday July 5th, I began following an hypnotic eye which was extended from the shoulder of a scantily clad woman whose rhythmic movements beckoned me on in a mystified daze as her twirling hula hoop sang to me its siren song. My odyssey led me to The Living Room Gallery allowing me to discovers that the streets outside the venue were filled with the art lovers who sought to enter its halls in order to experience the enticing qualities it is known to offer. The exhibit titled, “Art Under The Big Top” featured the work of area artists whose endeavors reflected the show’s circusy theme. The exhibit also welcomed Steampunk creations which are objects derived from a sub-genre of science fiction that utilizes 19th century steam-powered technology to either operate machinery developed much later or to power apparatuses invented during an alternative time period.

The artists’ reception for the exhibit offered music presented by electronic virtuoso Wilbium, foresights and explorations through the #ancient arts of cartomancy (tarot card reading) and chiromancy (palmistry) as rendered unto visitors to the realms of mystery by Cheryl Yost and Ashley Catherine Fontones, a color wheel in which prizes of uniqueness were offered to those who correctly predicted which color would appear after the wheel had completed its spin, and a dance designed to entice and beautify a desirous soul was given by the seductively superb Striptease artist known as Molly Mass Acre of Aerialgypsyburlesque www.facebook.com/pages/Aerialgypsyburlesque/573748552722070 who was accompanied by Brandon Meles (aka Brutus Lee). In addition to this, Danny’s Big Top Oddities offered steampunk treasures and other creations, Raw Earth Fabrications www.facebook.com/RawEarthFabrications presented unique pieces of cruelty free jewelry designed with naturally found materials, and the gallery’s iconic art raffle in which those who visit the event could partake of a chance to obtain a work of art donated by some of the participating artist for the price of a one dollar ticket was also featured.

The sizable gathering of artists and art lovers who filled the living room was almost as overwhelming to those who entered the gallery as the qualities of the 50 plus art objects that were placed upon the walls and in other areas with many instilling a profound curiosity within those who viewed the works as their wonderments spoke to the imagination. The festivities of the evening began as host and co curator, Keyaira Lynn Von Dred, shared her welcoming words with the crowd who heard her voice within their own awe inspired murmurs which were induced by the atmosphere that encircled them. She concluded her remarks by introducing the Wilbium who, donned in his iconic pilot’s helmet which has gained a welcomed familiarity among those who have seen him perform during the weekly Open Mic Nites held at the venue, began to transfix the gathering through the mesmerizing music he released from his computerized apparatus, guitar, and voice. Dancing filled the floor as forms moved as the enlivened spirits who possessed their beings guided their bodies while delight filled laughter emanated from their divinely secular throats.

While the majority of the company partook of the pleasures of the music presented by Wilbium, a number of denizens took advantage of the beautiful weather found outside the venue to engage in conversations relating to the art. During these conversments, other experiences which may be considered  as improvised sideshow attractions seduced their attentions such as the subtle or not too subtle skill of pop corn catching and the titillating antics of a trained beetle. It was quite a delightful distraction as many marveled as the unplanned (sometimes unintentional) feats were employed along with the uncanny dexterity of those who presented them.

However, as the resonance from Wilbium’s performance came to an end, those who partook of the games and foresights offered within the venue as well as the sidewalk entertainments soon found themselves re focusing their attentions upon The Living Room stage. Keyaira took the stage to express her appreciation for the performance that found itself lingering in the subconscious realms of its audience and took that time to share news relating to the future exhibits that will take place at the gallery. These included a show in August with four featured artists whose artists’ reception will include an auction from which its proceeds will benefit the local chapter of the American Red Cross. It was also announced that the next group show in September will be titled, “Art is Activism” offering members of the art community to share their creative endeavors in order to express their views on the political and social topics they feel needs to be addressed and explored. It was at the completion of her statements and announcements did Keyaira introduce Molly Mass Acre to the crowd.

An excitement filled the room as the music began to play and the sight of the enticing burlesque dancer known as Molly Mass Acre adorned her spectacular beauty in patriotic attire filled the eyes of all who saw her with star spangled banner delight. The poetic movements of her form and the deft articulations of her limbs spoke to the longing depths of those who visually listened with all of their intensity to every utterance of her symmetric vocabulary. Ms. Mass Acre was joined on the on stage by Brandon Meles (aka Brutus Lee) whose contortionist maneuvers enhanced the experience of the joyful performance. Yet, as well presented Mr. Meles’ contribution to the experience was, the focus of attention remained on Ms. Mass Acre as successions of rapid and lingering touches revealed the beauty of her physical form to the delight of the gathering whose crescendo of intoxicating excitement was built upon by one breathtaking sigh after another until the climactic conclusion of her performance had arrived. Wow.

A recuperative quiet touched the room for a number of moments after Ms. Mass Acre left the stage until the sounds of applause filled the air. It was after some composure regaining time following the incredible experience presented by Molly Mass Acre and Brandon Meles (aka Brutus Lee) were collectively received did the evening’s art raffle take place. It was a challenge for the unparalleled excitement of the burlesque performance to be matched but the emotions roused by the ever popular raffle had its way with the audience which was filled with eager ticket holders. Keyaira and a number of the artists who donated their work to the raffle chose a winning ticket from the cup that corresponded with the pieces offered as Andrew Oldfield and Amanda-Jean Frisella shared an elevated view of them.

The air thickened with anticipation as each digit appearing on a raffle ticket was read until the atmosphere’s molecular density was sliced with the excited squeal of the owner of the final number in the coveted sequence. This breathless ritual continued until the final item was retrieved which led to some sentiments of farewell and gratitude to be shared by Keyaira along with an invitation to return for the August exhibition that were immediately accepted by the enchanted crowd. The work presented in Art Under The Big Top exhibit reflected the theme quite nicely with a number of pieces demonstrating a very imaginative interpretation of the topic. While some pieces were better constructed than other, the overall quality of the exhibit allows visiting the gallery during it’s regularly scheduled hours a very well worthwhile endeavor and is highly recommended. You’ll be able to find more photographs taken during the Art Under The Big Top Artists’ Reception in The Living Room 2014 Gallery Part 4 at www.facebook.com/media/set/?set=a.10152489839930421.1073741902.636000420&type=1.

The Sherman Theater’s Living Room Gallery Art Under The Big Top exhibition featuring the work of local artists will be on display until July 30th. The Gallery’s next exhibit will feature four selected artist whose names are yet to be revealed. The Artists’ Reception will be held on Saturday August 2nd beginning at 6pm and will continue to be on display until August 30th. Please contact the gallery’s Directors and Curators, Keyaira Lynn Von Dred and Andrew Ozkenel, at 570-421-2808 for more information.

The Sherman Theater’s Living Room is located on Main Street in Stroudsburg, PA next to The Sherman Theater who owns the building. The venue is a non-profit artspace and community hub featuring live music, performances, and other events in an intimate setting at affordable prices. Please Explore The Living Room Facebook Page at www.facebook.com/pages/The-Living-Room/123978921059378 for more information on The Living Room, all they have to offer, and how to be a part of it all.

In addition to their exhibitions, The Sherman Theater’s Living Room presents a weekly Open Mic Nite which occurs every Sunday Evening beginning at 7pm. Musicians, Poets, Writers, and anyone who would like to share their talents with an eagerly accepting audience are welcomed to participate. There is occasionally a featured band or performer scheduled that enhances the enjoyment of the event. You can learn more about The Living Room Open Mic Nite Series on it’s Facebook Page at www.facebook.com/OpenMicAtTheLivingRoom?ref=ts&fref=ts.
Posted by Unknown at 2:29 PM