Panty of Sax, Glitterus, Baby Names, and Jerry Fels at 84 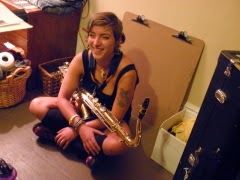 On Friday July 18th, a porch full of friends were gathered outside the Stroudsburg, PA apartment (numbered 84) inhabited by Rebekah La Loi and Bobby Propst who, along with their pets, books, and an everlasting love for music and each other, presented a house concert. I entered the home and traveled up through its stairway corridor to found another gathering of friends relaxing in conversation with Rebekah in their living room as they awaited the arrival of other guests who shared a desire to partake of the evening’s festivities. These festivities included performances given by Jerry Fels and the Jerry Fels www.facebook.com/jerryfelsandthejerryfels, Emily Elizabeth, Baby Names (aka Andy Brooks) www.facebook.com/BabyNamesMusical, and the newly formed group known as “Glitterus” www.facebook.com/glitterusband. The passage of time filled the apartment with a sizable audience whose love for the camaraderie they immediately experienced collectively beckoned the musicians to share their talents with them.

The first to answer this clarion call was Jerry Fels of Jerry Fels and the Jerry Fels whose keyboard, guitar, and ankle tambourine lent their musical qualities to a series of compositions that filled the minds of all who listened to their nuances. An ocean of subconscious dewdrops whose ephemeral connections led to the creation of everlasting currents which flowed throughout the room on a tide of delightfully bemused laughter. While many were content to have their perceptions expanded by the music the solo performer as they were comfortably seated upon the furnishings and floor the apartment afforded them, some were spontaneously moved to manifest the internal truths they found within the songs he sang through the art of dance. This sight delighted the audience as evident in the numerous conversations that were shared about that and the intricacies of Mr. Fels’ performance during the break which occurred after its completion.

After the break, Jazz Saxophonist Emily Elizabeth took the stage and proceeded to share a number of Jazz standards with the gathering. Their melodies soothed the company with their vibrational charm as they flowed through the spirit of the instrument. Although the dreams of each composition originated with the composer, their soulful manifestations were brought to the fore through the deft musical skill of Ms. Elizabeth whose gentle phrasing and interpretation of each piece inspired a conversation to take place between each listener and the musical imaginings he/she experienced. This conversation was evolved to a more animated state as the performance concluded and many sought to explore their new found love for the art of Saxophonic Jazz and all of its nuanced qualities.

It was after this break filled with questions and discoveries did Baby Names (aka Andy Brooks) take the stage. After it was revealed Mr. Brooks had traveled from Boston, MA to share his talents with the gathering, he took his guitar in hand and began his set with a series of songs whose simple qualities soon lured the audience deeper into their essential elements through their hypnotic complexities until they joyfully found themselves in synch within each song’s communicative lyrics, chords, and rhythms. Mr. Brooks then changed the direction of his performance as he introduced his laptop computer to the session which contained a number of songs giving the later part of his set a karaoke fragrance to it. This pleased the crowd as the hip hop melodies flowed among the company leading to a number of rhythmic sways of delighted heads. After the conclusion of Mr. Brook’s performance and a break, the newly formed group known as “Glitterus” made their debut upon the stage.

On their Facebook Page, Glitterus claims to be “an all girl band from the planet glamtron” who occasionally lands on planets such as Earth to have fun. No qualified astronomers were present to dispute such assertions so their validity remained unquestioned. This was, however, until the music began and all doubt was removed. The group consists of Adolf Glittler (aka Zeke Cats) on vocals, guitar, ukulele, violin, and other forms of technology, Ambrosia Salad (aka Jamber Ade) on vocals, trumpet, keyboard, and theremin, Kitty Kitty Bang Bang (aka Katherine Freeman) on vocals, bass, accordion, and whistles, and zsa zsa BOOM unit (aka Renee Dee Moonunit) on vocals and percussion. They immediately conquered the inhabitants of the planet as represented in the room through their endearing attire which embodied an eclectic array of adornments including pirate hats, multidimensional eye wear, and feathered boas along with a clothes line filled with panties with the word, “Glitterus” printed upon them in glitter which served as their back drop.

After opening the cerebral centers of the interpretive mind through a series of conscious altering sounds reflecting the culture of their home planet, Glitterus soon moved into the musical realm of performance art that engaged and challenged the senses like a Russ Meyer Beach Party film starring Frankie Avalon and Annette Funicello as produced at Andy Warhol’s Factory. The performance fascinated and delighted the audience as the multiplicity of allusions to popular culture and their transformative perceptions of it proved to be beyond entertaining. The performance concluded with an invitation to those present to be fitted with the panties that hung upon the line and have their photograph taken. Many accepted the invitation and gladly became models in order to enhance intergalactic relations.

A series of farewells spread throughout the apartment after the modeling session. The company of friends created throughout the evening made their way through the halls, down the stairs, and onto the outside porch where numerous conversations filled the night air. However, within the kitchen area of the abode, Bobby and Rebekah was found exploring a song together. The manner in which the individual creative approaches of the two artists combined to discover the intricacies of a song proved to be very insightful to the musicians who were present to witness the collaboration. However, as a non musician, all I saw was love. You’ll be able to find more photographs taken during the Friday July 18th house concert in The House Music 2014 Gallery at www.facebook.com/media/set/?set=a.10152300688790421.1073741887.636000420&type=1.
Posted by Unknown at 4:07 PM