The Trinity Centennial at The Park 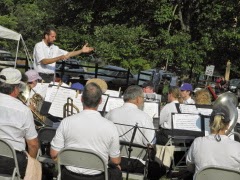 The Stroud Township in PA presented The Trinity Centennial Band in the Jay Albertson Park (named after retired Township Supervisor Jay Albertson) on Sunday June 29th as part of their 2014 Summer Concert Series. Many gathered to set up their folding chairs in order to take their place under or around the tents the township had set up for the occasion while others sat comfortably upon the park’s gazebo or just outside their neighboring homes. It was during this time did those who would perform in the 55 piece ensemble prepare to do so with the delightful sound of final tuning of the many instruments taking place.

The concert began with the playing of the National Anthem of the United States that was followed by some welcoming words expressed by The Trinity Centennial Band’s primary conductor, Tom Salmon who also announced the ensemble was celebrating its 23rd year. The concert continued with several varied selections ranging from patriotic tunes to classical compositions with many performed under the direction of different conductors who each demonstrated a slight variation in their musical approach which enhanced the enjoyable aspects of the overall concert. The music performed throughout the concert flowed like a gentle breeze filling the air with the refreshing essence of each composition.

The conductors who presented their offerings to the audience were Marta Oberlin, Karl McDannell, Jenny Galunic, Andrea Stiff, Gene Bartz, and Floyd Frisbie. Michael Yasenchok performed as a soloist and whose powerful voice resonated throughout the park adding depth to the composition he presented. The concert was an enjoyable one with a wide variety of songs as well as manners in presenting them that proved to be enough to satisfy anyone’s musical taste. You’ll find more photographs taken during The Trinity Centennial Band concert in The Concerts in the Park 2014 Gallery at www.facebook.com/media/set/?set=a.10152535822295421.1073741907.636000420&type=1.

The Trinity Centennial Band is a Community Band for the Poconos who presents outdoor concerts during the summer season at a variety of locations throughout the area. The sizable ensemble consists of amateur and professional musicians who live locally. Their next performance will take place at The Grace Park Senior Living Establishment located in Stroudsburg, PA on Saturday July 12th beginning at 2pm. You can learn more about The Trinity Centennial Band  and their schedule by exploring their Facebook Page at www.facebook.com/pages/Trinity-Centennial-Band/173643312684061.

The Summer Concert Series is presented by municipality of Stroud Township which is located in the heart of the Pocono Mountains in Northeastern PA. In addition to its outdoor Summer concerts, the Township offers scenic areas such as the Appalachian Trail and many local parks. The Next installment of The Stroud Township Summer Concert Series will feature Riverside Rhythm www.facebook.com/pages/Riverside-Rhythm/106347689423155 beginning at 6pm in the Jay Albertson Park on Sunday July 20th. Please Explore The Stroud Township, PA Website at www.township.stroud.pa.us to learn more about the concert series and all the township has to offer its community and visitors.
Posted by Unknown at 1:29 PM