A Night of Favorites 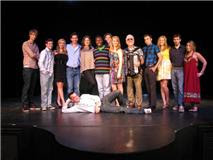 The evening consisted of a variety of musical performances ranging from show tunes and torch songs to folk songs and an instrumental piece on an accordion. A modest gathering attended the event which was very enjoyable. The show was the second of a three part series with the third and final one taking place on Thursday August 26th. The admission is free. Please Contact The Shawnee Playhouse at 570-421-5093 or visit their Website at www.theshawneeplayhouse.com for more information.

Photograph provided by The Shawnee Playhouse.
Posted by Unknown at 1:50 PM