Musicians, and Singers, and Artists. Oh My. 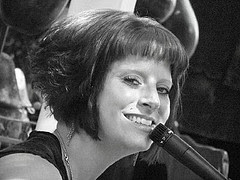 A multitude of Music and Art Lovers converged upon the little town of Milford, PA who held their Annual Music Festival from Friday July 30th until Sunday August 1st. The weekend included two festivals in conjunction with the main festival. They were The Sidewalk Shopping Festival which (like the main festival) occurred throughout the town and “Javapalooza” with musical performances centered at 7th Street Coffee located on Broad St. at the edge of Milford. I only was able to attend Saturday’s events but I was still pleasantly overwhelmed by the variety and quality of music and art I encountered during my relatively short visit.

There was music everywhere. One only had to take a few steps from business establishment to business establishment to discover a new band or soloist performing. Yet, one could appreciate the thought processes that must have taken place in the event’s planning as the performances were spaced out at just the right distances preventing one to drown out another. This allowed each attendee to enjoy the band without any unwanted distraction.

These venues and bands included Teri Dixon performing at The Tom Quick Inn, Eric Langberg and Bluestone performing at Fretta’s Italian Specialties, 90 Proof performing at Davis Chant Reality, White Light performing at The Harrington House, Sarah Morr performing at The Craft Show, and Mega Savant performing at 7th Street Coffee. The town also held a block party at Jorgensen’s which is located at the Dimmick Inn featuring a variety of bands, food, and games in a carnival like setting which enhanced the enjoyment of the entire festival. There were many more musicians performing at many more venues, but the ones I mentioned were the ones I got to personally see. If only I could get funding to bid on one of those cloning experiment kits I saw on Ebay.

There were also many artists and artisans showing their work during the festival. They included The Bluestone Gallery which is presently featuring the work of Joyce Ellen Weinstein in an exhibition titled, “Uncommon Figuration” which continues until September 26th. There were other works on display in this elegant gallery filled with specially selected pieces by its co owners Dave Greenbaum and Robert Levine have chosen whose artistic taste is beyond impressive. This and other Milford galleries like The Golden Dragon and The Artery never fail to provide me with an artistic home away from home which is in Stroudsburg, PA. You’ll find more photographs I took during my day at the festival in The Forwardian Arts Society Milford Music Festival 2010 Gallery at www.myspace.com/forwardian_arts.