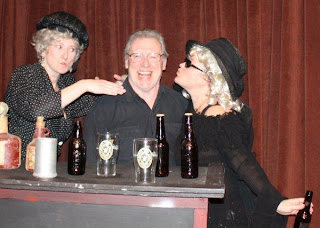 The Shawnee Playhouse in Shawnee on the Delaware, PA is currently their presenting their production of “A Wee Bit O’ The Irish” featuring a collection of songs, jokes, and a taste of Ireland going beyond that of a pint of Green Beer. The revue is an adaptation of “Great Day for the Irish” written by Rod and Janet Foote. The presentation includes a cast consisting of Patrick Bresnyan, Sara Ferguson, Byrdie Jacques, Midge McClosky, and Scott E. McIntosh. Dancers from The Gallagher School of Irish Dance were also on hand to add some cultural atmosphere to the production.

The revue was enjoyable enough in spite of the opening night technical problems arising throughout the presentation. However, this reviewer remains hopeful the misdirected sound cues and the music overpowering the songs being sung will become adjusted as the production continues to be presented. All in all, it was a good show reminiscent of an enjoyable night at the pub which everyone hears a good joke and has an opportunity to sing along to their favorite song.

This production of “A Wee Bit O’ The Irish” continues its run at The Shawnee Playhouse in Shawnee on the Delaware, PA until March 16th. The revue is an entertaining evening out for those who enjoy all things Irish as it compliments the upcoming St. Patrick’s Day Holiday. The songs range from those which are touching to the heart to those that are fun to sing along with. The play also has some moments detailing the history of Ireland and it’s people as they migrated to the United States.

The next Shawnee Playhouse presentations will include “The Importance of Being Earnest” by Oscar Wilde March 27th - April 11th, “A Cheever Evening” April 16th - 25th, and “Dr. Cook‘s Garden” April 30th - May 9th. Those who enjoy the Passionate Art Lover level of membership in The Forwardian Arts Society are offered a $3.00 discount off the admission fee of The Shawnee Playhouse Productions (excluding Children Theatrical Productions and those presented by non Shawnee Production Companies). Please contact The Shawnee Playhouse at 570-421-5093 for more information and to reserve your ticket.

The Websites of those mentioned in this article are The Shawnee Playhouse at www.theshawneeplayhouse.com and The Gallagher School of Irish Dance at www.gallagherschool.com.