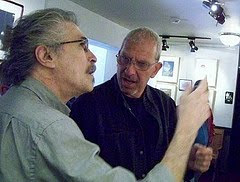 The Pocono Community Theater in East Stroudsburg, PA held an Artists on Saturday March 6th featuring a show entitled, “Artist and their Mediums” exploring the work of six local artists created on various mediums. These artist included Lenore Fiore Mills whose medium was Batik, Jan Selving whose medium was Collage, Jim Hannan whose medium was Charcoal, Julie Wane whose medium was Pastel, Don Manza whose medium was Photography, and Marcos Oksenhendler whose medium was Watercolor. Each set of works reflected the individual artist’s approach to their creative endeavors but there was also a flow connecting the entirety of the works unifying the experience for those who attended the event.

This flow allowed the viewer of the pieces to connect with a widening concept of the world around them. By observing each medium and how seemingly very different approaches created a coherency, one gains an opportunity of examining the apparent random incidences embodied in their life’s journeys to discover their apparentness is an illusion and they aren’t random at all. In fact, it’s a very intricate pattern which can be understood as our awareness becomes receptive of its flowing nature. The exhibition will continue at The Pocono Community Theater until April 3rd. You’ll find more photographs at The Forwardian Arts Society Pocono Community Theater 2010 Gallery at www.myspace.com/forwardian_arts.

The Pocono Community Theater continues to serve the film lovers throughout the area with their showing of independent and foreign films not commonly shown in larger venues. The films presently being shown art “Alice in Wonderland,” “The Last Station” and “Shutter Island.” The film “Alice in Wonderland” was the film recently seen and discussed during The Forwardian Arts Society Monthly Film and Chat Gathering for March. You’ll find our review of the film posted on our profile.

The next events to be held at The Pocono Community Theater are a screening of the award-winning documentary entitled, “Out in the Silence” at 1pm on Saturday March 13th followed by a Panel Discussion and another installment in their Silent Movies to Loud Music Series on Thursday March 18th at 8pm. Please feel free to contact The Pocono Community Theater at 570-421-3456 for more information on their film showing times and other offering they have.

Websites of those mentioned in this article are The Pocono Community Theater at www.poconocommunitytheater.org, Lenore Fiore Mills at www.fiorebatiks.com, “Out in the Silence” and www.OutintheSilence.com, and The Forwardian Arts Society at www.theforwardianartssociety.com
Posted by Unknown at 7:14 PM