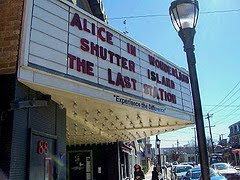 "Beware the Jabberwock, my son!
The jaws that bite, the claws that catch!
Beware the Jubjub bird, and shun
The frumious Bandersnatch!"

From the poem "Jabberwocky" written by Lewis Carroll 1872 as a part of his novel “Through the Looking-Glass and What Alice Found There.”

The Tim Burton film, “Alice in Wonderland” is not only based upon novels written by Lewis Carroll entitled, “Alice’s Adventures in Wonderland” and “Through the Looking-Glass and What Alice Found There,” but it expands upon the work as only Tim Burton can. After all, many of his films already takes place in a Wonderland type setting with characters as rich and unusual as those created by Lewis Carroll.

The film begins with the young Alice telling her father of her bad dreams which takes place in wonderland. He calms his daughter fears of insanity by saying she is quite “bonkers” but the very best of people often are. The film soon moves forward in time to when Alice is an adult being prepared to be engaged. The audience viewing the scenes related to this occurrence who are familiar with the novels soon begin to wonder which is more bizarre; wonderland or the world Alice is living in with all its Victorian etiquettes.

We are soon relieved as we’re taken to wonderland with Alice as she follows the white rabbit down his hole and begins encountering the sensible world of the non sensible. The images Tim Burton creates for the film are fanciful while allowing us to feel at home with them. This is partly due to his earlier works, but there is something unique about how this film invites the audience to become a part of its world.

As we travel with Alice on her new Adventures in Wonderland, we become reacquainted with the characters from the novels. However, this time we’re not seeing them from a child’s point of view but through a more adult one. They are more darker and complex than those portrayed in the novels. But, just as a child grows older still loving his or her parents in spite of the realization they’re not perfect, we still can embrace the Mad Hatter, The White Rabbit, the Door Mouse, the hookah smoking Caterpillar, and even the Cheshire Cat if he can stay materialized long enough for us to do so.

As the film progresses, we discovered Alice has been sought out by Wonderland’s denizens (who we learn prefer to call it “Underland”) to kill the dreaded Jabberwocky and end the tyrannical reign of the Red Queen. She is hesitant to embark on such a quest as she learns of the beasts ferocity, but she soon discovers her “Muchness” as she remembers her fathers advice to do six impossible things before breakfast.

After completing her task, she returns to the “Real” world and decides to keep all she won within her. With the scars of the Bandersnatch still upon her arm, she begins a business adventure with her late father’s partner expanding upon his visionary dreams. The film ends with Alice traveling afar transformed in very much the same way the caterpillar has since transformed into the butterfly who accompanies her.

“Alice in Wonderland” is a delightful film and can be considered one of Tim Burton’s best. Johnny Depp’s performance as the Mad Hatter is great. However, he and the other actors seen in other Tim Burton films merely supports Mia Wasikowska portrayal of the adult Alice though their considerable skills. The film remains centered around her and her experiences. Thus making her adventure our adventure as well.

“Alice in Wonderland” is rated PG and is currently running at The Pocono Community Theater in East Stroudsburg, PA. You may call 570-421-3456 for show times and dates. Most films run one week but some films may be held over for an additional week or two depending on ticket sales.

After the Friday March 5th showing of the film, The Forwardian Arts Society Gathered in The Pocono Community Theater’s Café to chat about it. The turnout was minimal but the conversation was very engaging and proved to be as fanciful as the film. We invite you to join us Friday April 2nd to watch a film and participate in an equally stimulating conversation. You’ll find more photographs at The Forwardian Arts Society Film and Chat Gathering 2010 Gallery at www.myspace.com/forwardian_arts. Please contact us through our website for more information.

The Websites of those mentioned in this article are The Pocono Community Theater at www.poconocommunitytheater.org and The Forwardian Arts Society at www.thefowardianartssociety.com.
Posted by Unknown at 6:57 PM