“Underneath the Lintel’ fascinates at Centenary 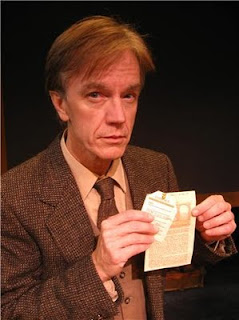 I hope my words find you well. Here is a review regarding The Centenary Stage Company’s Production of “Underneath the Lintel” which is continuing its run until November 22nd. Please feel free to explore their website at www.centenarystageco.org for more information. I look forward to hearing from you soon and I’ll keep a good thought for you until then.

We love theater because, when it works, it does magic. It turns one person into another. It transforms time and place.

That kind of magic is happening on the stage of the Centenary Stage Company, on the Centenary College campus at 400 Jefferson Street in Hackettstown, where Glen Berger’s intriguing dark comedy, “Underneath the Lintel,” will be presented through Sunday, Nov. 22.

The Librarian, the only visible character in the 80-minute opus, is being played by Steven Dennis. Or, more accurately, Steven Dennis is becoming the Librarian. His performance is more a transformation than a portrayal.

And he is the only visible character because the play has an invisible one too: the subject of the Librarian’s quest and his obsession. Because of the brilliance of the writing, the intensity of Dennis’s performance, the deftness of Carl Wallnau’s direction, and the cleverness of Brian Flynn’s set design, the audience is drawn into that quest. The Librarian’s obsession becomes the audience’s as well. That’s what theater at its best does.

The play is quirky. A Dutch librarian of middle age and limited accomplishment finds in the book drop one morning a battered copy of Baedeker’s travel guide. He determines that it is 113 years overdue.

Moved by bureaucratic zeal he thinks, What a coup it would be to collect that fine!. But who is this mysterious miscreant, identified only with the capital letter “A,” who is responsible? Aha! There’s a clue, an ancient laundry ticket from a cleaning establishment in London.

That he pursues the clue, although London is far and the library refuses to pay for his travel, is a telling window into the soul of this man. We know from a few snippy comments about his co-workers that he is not immune to pettiness. Something unspoken in his manner tells us right away that he has no family at home waiting for him at the end of the day. In fact, he has so little in his life to engage him that he is swept away by the mystery of the book and its borrower.

The first clue leads to a second and London leads to China and then to Bonn, and so forth. The clues take him on an odyssey that leads him to a strange conclusion: The travel guide was borrowed by The Wandering Jew of legend. Which leads us to the meaning of the play’s title.

The myth, of indeterminate origin, is that a cobbler in Judea found, collapsed by exhaustion on his doorstep, a criminal, on his way to execution by crucifixion. Though at first moved to offer comfort, he made what is perhaps the world’s most common decision: Not to get involved. Since the man on the doorstep was Jesus, the cobbler, whose name is Ahasuerus, suffered a far worse consequence than befalls most who make that decision. He was doomed to wander the world with no respite until Jesus returned. All this happened on his doorstep, underneath the lintel.

That the punishment doesn’t fit the crime, and this whole story seems very unchristian, has not stopped the story from hanging on. Ahasuerus, or A., the Librarian discovers, has turned up in a multitude of places over the centuries, most recently he relates, outside the fence of a Nazi death camp.

We gradually see the Librarian assuming for himself many characteristics of this mythological person he is pursuing. The weight of the world is on his shoulders but he finds he also can’t, figuratively, sit down and rest.

All of this is related by the Librarian, speaking to the audience from a grungy-looking lecture room (that cleverly-designed set) rented for one evening for “An Impressive Presentation Of Lovely Evidence,” as the play is subtitled. His presentation is aided by a handful of props and a few slides projected on a screen.

What is most surprising about the Librarian and his tale is that it is funny! Not Three Stooges funny or George Carlin funny. The dry and prissy man on the stage makes us laugh most often because we begin to recognize aspects of ourselves in him. Therein lies the brilliance of Dennis’s portrayal.

Thursday is Family night, with two tickets for the price of one at the box office prior to the performance. Discounts are also available to seniors and students. Moreover, during the run of “Underneath the Lintel,” a special 15 percent discount will be offered to anyone presenting a card for any New Jersey library.

For more information and reservations, call the box office at (908) 979-0900 or visit the website, www.centenarystageco.org