Souls Giving Thanks to Horror 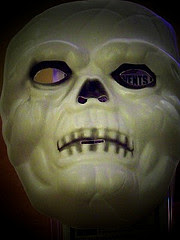 The Sherman Theatre* in Stroudsburg, PA hosted a special Thanksgiving installment of their Severed Sinema* Series on Thursday November 19th presenting the films, “Horror Hotel” and “Carnival of Souls” along with two short experimental films entitled, “Girl and a Bicycle” and “Robots Don’t Exist.” In addition to the films being shown, there were a variety works of whose styles had a visual relationship with the films while Steve Truglio* of the Real Great Debate Show on The Pocono Internet Broadcasting Company (PIBCO)* was on hand to sell his line of Dead Issues* Tee Shirts. The entire evening proved to be a great time to enjoy some truly creepy films, checking out some intriguing art work and apparel, and engaging in some enlightening conversations with horror and art enthusiasts.

The film entitled, “Horror Hotel” (whose original title when released in the UK was “City of the Dead“) was made in 1960 and directed by John Llewellyn Moxey who has received some renown for directing episodes from a variety of Television shows ranging from “The Saint to The Avengers” in the UK and from “Kung Fu” to “Murder She Wrote” in the US. It starred Christopher Lee as Professor Alan Driscoll, Patricia Jessel as Elizabeth Selwyn, and Valentine Dyall as Jethrow Keane with Venetia Stevenson as Nan Barlow. In spite of its low budget producing some slightly laughable moments, the film does manage to create a mood of eeriness throughout giving its audience something to gasp about.

The film begins in 1692 where a witched named, Elizabeth Selwyn is being burned at the stake by the townspeople of Whitewood, MA. She beseeches her fellow witch Jethrow Keane to intercede which he does by first denying he knows her and then praying to Lucifer to come to her aide. He does so by creating a storm allowing her to put a curse upon her tormentors. The film then cuts to a tutorial lecture on the incident is being given by History Professor Alan Driscoll in which Nan Barlow is one of the attendees. Her boyfriend and fellow student, Bill Maitland (played by Tom Naylor), mocks the idea there is anything to the curse or witchcraft itself but Nan proves to be more open minded to the possibilities. This allows her to be persuaded by Professor Driscoll to go to Whitewood, MA to research the event and write a term paper on it.

In spire of the objections of her boyfriend and brother Science Professor Richard Barlow (played by Dennis Lotis), she goes to the town. She meets the nearly 300 year old Jethrow Keane along the way and later the town’s Inn Keeper Mrs. Newless (who is the reincarnation of the witch Elizabeth Selwyn). She begins her research and soon experiences a great number of odd going ons until she becomes a victim of a ritual sacrifice. We later learn she is a descendant of one of the townspeople who took part of the burning of Elizabeth Selwyn back in the day and is recipient of the curse made against her ancestors.

The rest of the film takes place two weeks later and details the process of Nan’s boyfriend and brother quest to discover what has happened to her. They go to the town and soon begin to experience the same mysterious occurrences Nan had before her demise. However, when the grand daughter of a blind local reverend named, Patricia Russell (played by Betta St. John) is taken, they come to her rescue. The coven is kaput and so is the film.

After the film and intermission, the showing the short experimental films entitled, “Girl and a Bicycle” and “Robots Don’t Exist.” The first was pretty much about what the titled indicated. It was about a girl who took a ride on her bicycle. Yet, the four to eight minute film wasn’t so much what it was about but in its presentation. The colors were saturated so one could not see the images depicted but somehow one could tell what was going on. This was an interesting approach as it placed the cinematography of the film in each audience member’s imagination. The second film entitled, “Robots Don’t Exist” was a much shorter piece lasting only a few minutes but it nether the less proved to be a potent work as it contradicted it’s title and demonstrating the real robots that exist are humans as they routinely go through their repetitious daily endeavors.

The low budget 1962 “Carnival of Souls” shown soon afterwards which was directed by Herk Harvey and starred Lee Strasberg-trained Candace Hilligoss who portrayed Mary Henry. The film was made with a $33,000.00 budget over a three week period while the director was on vacation in Salt lake City UT from his job as a director and producer of industrial and educational films for The Centron Corporation which was located in Lawrence, KA. The film didn’t receive much attention when it was first released but has since gained a large cult following as evident from the audience members of this night’s Severed Sinema event.

The film begins in the Lawrence, KA area where two drivers challenge each other to a drag race. While crossing a bridge, an accident ensues sending one of the cars into the river. One of the passengers, Mary Henry, is later seen walking dazed upon a sand bar by the rescue team who are searching for the car and any survivors. She later returns to her life and leave town to begin her job as a church organist in Salt Lake City, UT. She begins to see a mysterious figure who appears at frightening times during her journey.

Her arrival at her destination is accompanied by even more bizarre experiences which includes more visitations by the figure and not being seen or heard by those around her. She is inexplicably drawn to a Pavilion which she discovers was a carnival. She becomes obsessed by the pavilion feeling she is somehow tied to it in a way that she can’t understand. She visit’s the Pavilion alone and discovers something she had guessed at was all too true. In turn, we are shown the truth of her experiences in a surprise ending.

Most of the film shown during The Severed Sinema* Series are noted to have the distinction of being so bad they’re good. But, this was not the case during this installment of the series. Although “Horror Hotel” and “Carnival of Souls” were low budgeted films and subject to the flaws the lack of funds could have upon a production, these were far from inferior works. The acting, directing, and the cinematography create a mood that often escapes many modern day horror films as they lack the same level of talent of those who made the films shown at The Sherman Theatre* that night. This made the evening an enjoyable one not only for horror cult film aficionados but for film lovers in general.

The Severed Sinema* Series showcases the best classic horror, cult, and art house cinema each month whose goal is to act as a vessel for people to experience, re-live, and enjoy the golden era of extreme cinema in all its scary, sleazy, and sometimes cheesy glory. The next installment of The Severed Sinema* Series will be held at The Sherman Theatre* in Stroudsburg, PA on Thursday December 10th beginning at 7pm featuring the films entitled, “Don't Open til Christmas” and “Christmas Evil” along with an opportunity to have your picture taken with their Evil Santa with special effects created by Shane Izykowski*. There will also be music provided “Mega Savant” but I personally wouldn’t expect to hear any old time Holiday Carols.

The next events taking place at The Sherman Theater includes a performance by Railroad Earth* on November 27th and 28th who are back by popular demand. Please Contact The Sherman Theatre* at 570-420-2808 for more information. You’ll find more photographs in The Forwardian Arts Society Film/Video 2009 Gallery www.myspace.com/forwardian_arts.

The websites and email addresses of those mentioned in the article are The Sherman Theatre* at www.shermantheatre.com, Severed Sinema at severedsinema@hotmail.com, Steve Truglio* of the Real Great Debate Show at www.myspace.com/beanerandweevil, The Pocono Internet Broadcasting Company (PIBCO)* at www.pibco1.com, Dead Issues* Tee Shirts at www.myspace.com/deadissues, Mega Savant at www.myspace.com/megasavant, and Railroad Earth* at www.myspace.com/railroadearth.

(*) denotes members of The Forwardian Arts Society in good standing and are considered Our Good Friends.
Posted by Unknown at 4:15 PM