A River Flows with Art and Cinema 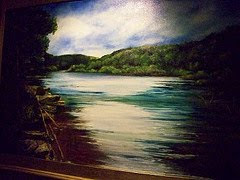 The Pocono Community Theater* in East Stroudsburg, PA held an Opening Reception for the 7th Annual Inter-Disciplinary Art Show entitled, “The Riv-7 The Delaware River–A Big Picture” featuring a variety of artists and styles all paying homage to the Delaware River area on Saturday November 14th. Numerous artist presenting their work included Filmmaker Nick Patrick whose documentary film entitled, “Ghost Waters” detailed the story of the abandoned Tock’s Island Dam Project of the early 1960’s and how it affected the local population living along the Delaware River. The film complimented the complex beauty depicted in the paintings and photographic images of the river.

A large crowd filled the halls of the quaint little theater which has become well known for the independent and foreign films they show to a discerning audience. Yet, this afternoon, they opened their doors to art lovers who find a unique fascination for The Delaware River which figure prominently in the Monroe County Area. The works found along the theater’s wall presented all the complexities of the river ranging from it’s quiet journey from the New York State area to its end in the Philadelphia, PA area when it enters the Atlantic Ocean. The pieces themselves were as varied in their dimensions as they were in their styles which created a unique phenomenon of encouraging the viewer to look closely at the smaller images thus allowing him/her to see even more when their gaze were cast upon the larger ones.

A special treat was presented to those who attended the Opening in the manner of some films relating to the Delaware River being shown. The first film was Nick Patrick’s “Ghost Waters” whose Documentarian approach his film was quite unexpected and pleasing to the viewer. The film began as a narrative film which means it started as a story of a couple who ran out of gas and searched an abandoned town until they came across a man in an empty barroom. It was from him they learned the story of The Tock’s Island Dam Project as the audience began meeting people who were involved in the film’s subject in the usual Documentary film manner. This made the film much more interesting as it would have otherwise have been as it places us in the position of the young couple who is discovering why the town is so disserted.

The second film was entitled, “Lucky Lake” and was made by Tina Spangler who won a grant from the New York State Council on the Arts (NYSCA) for the film. The film is about an area called Lucky Lake (aka Luxton Lake) which is located two miles south of Narrowsburg, NY (on the east shore of the Delaware River in an area between the Catskill and the Pocono Mountains). It once had a racially mixed vacation community with a vibrant past which was a jazz and vacation Mecca throughout the 1950s and ’60s until, in 1982, the lake was drained causing the population to dwindle. Although the film was a brief and a much more conventional documentary than “Ghost Waters,” it nonetheless proved effective in depicting the frustration people feel when the politics of water effects their lives in ways they have no control over. The film proved to be a good companion piece to its predecessor.

Among the artists showing their work at The Pocono Community Theater* during “The Riv-7 The Delaware River–A Big Picture” exhibition were Jackie Lima*, Jim Smeltz*, Will Daskal*, Jean and Gordon Perry*, Joanne Bridgeman*, Joan Polishook*, Thomas Augusta*, Penny Ross*, and the exhibit’s coordinator Rod Cameron*. The Exhibition continues until January 10th with several events yet to be scheduled including a poetry reading and musical presentations. Please contact The Pocono Community Theater at 570-421-3456 for more information. You’ll find more photographs at The Forwardian Arts Society Visual Arts 2009 Gallery www.myspace.com/forwardian_arts.

The websites of those mentioned in the article are The Pocono Community Theater* at www.poconocommunitytheater.org, Will Daskal* at www.willdaskal.com, Thomas Augusta* at www.thomasaugusta.com, and The Film “Ghost Waters” at www.ghostwaters.com.

(*) denotes members of The Forwardian Arts Society in good standing and are considered Our Good Friends.
Posted by Unknown at 8:52 PM