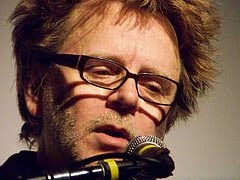 The Pocono Community Theater* in East Stroudsburg, PA and Eclipso Media Wurks presented a reading of works along with a musical performance by members of Railroad Earth* on Saturday November 28th. The afternoon celebrated the completion of a manuscript written by Samuel Saint Thomas entitled, “Frying Spam and Other Things to do before The Rapture” in an event called, “Memories and Martinis” and included a Martini Reception at The Liquid Martini Bar located in Stroudsburg, PA after the event. The well attended event has the distinction of being initiated and promoted through facebook.

The event began with a welcoming statement given by Eric Hanston* of The Pocono Community Theater*. Rex Fortuna then took the stage to introduce the writers and musicians who were about to share their talents. Rex is best known for his show on The Pocono Internet Broadcasting Company (PIBCO)* whose show entitled, “Purveyor of Style” can be heard every Tuesday beginning at 6pm.

The readings began with a recitation of work created by musician and writer Michael Buozis of the Band Nocoats. His sense of poetic melody was quite evident as he read his words. The poetic essence of his words flowed though his voice which enhanced not only the pleasure of hearing them but also added something indescribable to their deeper meanings. It brought to mind how much richer literary work is when the writer has a poet’s love for words and the playful sounds they can make.

Poet and teacher Sara Bauer followed with work reflecting the many images she continues to carry from her past. Many centered around her family and how much its members mean to her. One could not help but to be touched by those recounting her relationship with her grand father and the stories of her parents’ romance. In the later, she described how her father would travel a distance on foot to court her mother. It reminded me of stories my father told me of how he once walked up a steep and long hill during a snowstorm to be with my mother. I’m not certain if the tales my father told are true, but, if they are, Ms. Baurer’s poem gave me an understanding of his love for her I didn’t have before.

The spoken word was followed by a performance by Timothy Carbone, John Skehan, and Andy Goessling of Railroad Earth*. This well known Jam Band scaled down to an acoustic set with Guitars, Mandolin, and Fiddle to accompany the rousing yet soothing songs they presented. This was a delight as it allowed many of their fans (including me) to just sit and listen to their music without the usual atmosphere adding to the performance. Not that the atmosphere is unwelcome as it often enhances the experience of the performance. But, just as it’s great to live an exciting life, it’s also good to just sit and take it all in without any distraction no matter how pleasant they are.

After a brief intermission, Author Samuel Saint Thomas took the stage. The mixture of humor and pathos in his newly completed work entitled, “Frying Spam and Other Things to do Before the Rapture” captured the audience with its bizarre stories that seemed a bit too familiar to many. The stories consisted of instances in Saint Thomas’ childhood memories of being a member of a Pentecostal family. The reading proved to be quite enjoyable inspiring all who experienced it to look forward to purchasing the book once it becomes published.

The event ended but continued to The Liquid Martini Bar where a Martini Reception awaited all who traveled to the location. I personally did not go but I’m sure there were numerous occasions for those who enjoyed the event to learn more about those who participated in it. The Next event scheduled to be held at The Pocono Community Theater* will be The Forwardian Arts Society Film and Chat Gathering on Friday December 4th in which a film will be watched and followed by a discussion of it afterwards in the Theater’s Café. Please Contact The Pocono Community Theater* at 570-421-3456 for more information. You’ll find more photographs in The Forwardian Arts Society Literary Works Gallery www.myspace.com/forwardian_arts.

Here are the Website of those mentioned in the article. They are Eric Hanston* of The Pocono Community Theater* at www.poconocommunitytheater.org, Rex Fortuna of The Pocono Internet Broadcasting Company (PIBCO)* at www.pibco1.com, The Liquid Martini Bar at www.liquidmartinibar.com, The Forwardian Arts Society at www.theforwardianartssociety.com, Samuel Saint Thomas at www.samuelsaintthomas.com, Michael Buozis at www.myspace.com/nocoatsband, and Sara Bauer at www.sarabauerpages.com along with Tim Carbone, John Skehan, and Andy Goessling of Railroad Earth* at www.myspace.com/railroadearth.

(*) denotes members of The Forwardian Arts Society in good standing and are considered Our Good Friends.
Posted by Unknown at 9:11 PM