Martians at The Bookhouse 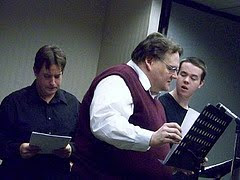 The Eastern Monroe Public Library* in Stroudsburg, PA hosted The Ghost Light Theatre* on Friday November 20th as part of their Bookhouse Series. They presented their re-creation of an installment of The Mercury Theatre on Air radio drama production of H. G. Wells “The War of the Worlds.” A large group of fans gathered to enjoy an evening experiencing the dramatization and all the history associated with it. It was an enjoyable performance as one could almost close their eyes and relive those auditory moments and the emotions of dreadful apprehension they inspired.

The Theatre Company itself was founded in in 1937 by Orson Welles and John Houseman and earned a reputation for their inventive adaptation of William Shakespeare's “Julius Caesar” which was set in contemporary Fascist Italy. They were later picked up by The Columbia Broadcasting System (CBS) to present an anthology series which began with their production of Bram Stoker's “Dracula” with Welles playing both Count Dracula and Doctor Seward. The broadcast of The Mercury Theatre “War of the Worlds” took place as a Halloween Special in the series on October 30th, 1938. It was written for the medium by Howard Koch and directed by Orson Wells who also starred in it. The series ended on December 4th, 1938 with their production of "Bridge of San Luis Rey."

The first two thirds of “The War of the Worlds” broadcast was presented as a series of simulated news bulletins which suggested to many listeners an actual Martian invasion was in progress. Since The Mercury Theatre on the Air was a “sustaining show” running without commercial breaks, the dramatic effect was heightened. There were numerous accounts of listeners believing an actual extraterrestrial invasion was in progress creating an unprecedented panic throughout the country. This was partly due to people listening to only a portion of the broadcast missing the introduction to the show and partly due to the ever growing tensions throughout the world which eventually led to the outbreak of World War Two. Regardless of the cause of the reaction, the episode was widely criticized as its news-bulletin format was considered cruelly deceptive by some newspapers and public figures.

The Ghost Light Theatre* re-creation of “The War of the Worlds” broadcast did not produce the panic the original was known for, but it did prove to be a good evening out. The cast performing the radio drama consisted of Dan Eash*, Irene Garner*, Maude Garner, Michelle Kane* (who also participated in the Program Art and Design along with Ethan Kane), Mark Lichty*, Kyle Mahaney* (who served as the production‘s Sound Consultant), Rob Ramos*, Patrick Turner*, and Chris Webster. The Production Stage Manager was Tom Nordin and was introduced by Barbara Keiser who is the Director of The Eastern Monroe Public Library*. Please Contact The Eastern Monroe Public Library* at 570-421-0800 for more information on future events in their Bookhouse Series and all they have to offer the community. You’ll find more Photographs in The Forwardian Arts Society Theatre 2009 gallery www.myspace.com/forwardian_arts.

The Website of The Eastern Monroe Public Library* is www.monroepl.org.

(*) denotes members of The Forwardian Arts Society in good standing and are considered Our Good Friends.
Posted by Unknown at 7:48 PM