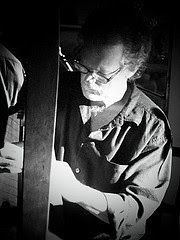 The ArtMusic Coffeehouse* in East Stroudsburg, PA presented Harpist Patrick Ball as part of their monthly house concert series on Friday November 13th. The friendly atmosphere welcomed all who were drawn to the abode owned by Don and Jan Slepian* to hear and become reacquainted with the souls met during previous concerts. However, newcomers to the series were greeted warmly in a similar manner which newborns are welcomed in the warmth of their families.

The evening’s host, Don Slepian, began the evening in his usual manner in which he played a series of compositions designed to wash away all the cares the pre-show conversations failed to dispel so the audience gathered could enjoy the sounds they were about to encounter more fully. And, what sounds they were. From the first stirrings of the harp Patrick Ball expertly played, a hypnotic hush encircled those who experienced them. The music moved each member of the large audience to contemplate all they were and could be in a journey taking them to indescribable realms where they met their spirits and played. This act of play was evident in the stories Mr. Ball interspersed throughout his performance. Their humor lightened the room with laughter which was accompanied by an everlasting smile.

The next installment in The ArtMusic Coffeehouse* will be Saturday December 5th beginning at 8pm although those who wish to attend are requested to arrive between 7 and 7:30pm. The performance that evening will be by Singer Songwriter Craig Bickhardt*. Please contact The ArtMusic Coffeehouse* at 570-476-6307 for more information and to reserve your spot as space is limited. You’ll find more photographs at The Don Slepian’s ArtMusic Coffeehouse 2009 Series Gallery www.myspace.com/forwardian_arts.

The websites of those mentioned in the article are The ArtMusic Coffeehouse* at www.artmusiccoffeehouse.com, Patrick Ball at www.patrickball.com, and Craig Bickhardt* at www.craigbickhardt.com.

(*) denotes members of The Forwardian Arts Society in good standing and are considered Our Good Friends.
Posted by Unknown at 8:48 PM