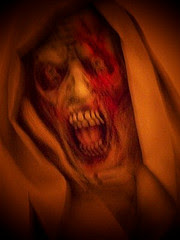 The Pocono Internet Broadcasting Company (PIBCO)* held their first Annual “Moll-O-Ween Bash” on Friday October 30th at The Mollie’s Restaurant located in Stroudsburg, PA. The décor of the restaurant lent itself nicely to the season as fans and DJs alike began wandering into the establishment. Some staggered in like zombies who have already indulged themselves in the many Halloween parties going on thorough the town while others strolled in with the grace and charm inherent in their elaborate costumes. The party-like atmosphere featured music presented by the station’s many DJs, many very unique costumes, some insightful conversations, and a lot of fun.

The Pocono Internet Broadcasting Company (PIBCO)* is owned by Rob Miller* and the welcoming he gave set the enjoyable tone of the entire event. The station was designed to help support and promote its community by providing it a locally owned broadcast outlet on the Internet by encouraging individuals and/or groups create their own shows on the station. Please Contact The Pocono Internet Broadcasting Company (PIBCO)* at 570-581-3398 for more information. You’ll find more photographs in The Forwardian Arts Society Friends Gallery. www.myspace.com/forwardian_arts

(*) denotes members of The Forwardian Arts Society in good standing and are considered Our Good Friends.
Posted by Unknown at 3:28 PM