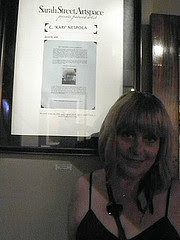 The Forwardian Arts Society held an Artist’s Reception on Wednesday August 24th at The Sarah Street Grill in Stroudsburg, PA for their Exhibition titled, “Forwardian Solo” featuring the work of Kari Nespola. An air of excitement was felt a while before anyone who wished to attend the reception arrived as last minute adjustments were being made in order to prepare for the visual and audio enchantments that would greet the art, music, and poetry lovers who would be a part of this wonderful event. As the modest gathering began to assemble, all such preparations proved themselves to be worthwhile endeavors as evident in the eyes and smiles of those who entered the gallery.

The visual work that met their eyes were as varied as they were colorful. The difficulty of believing the pieces presented in the show was created by one individual artist were expressed by several attendees. However, as Kari revealed herself to each person, they began to see the vibrancy of her talent and its ability to encompass and master the variety of styles and themes they were witnessing. Many conversations were initiated by those who desired to learn more about the artist, her work, and themselves. The profound beauty found in much of her work touched their souls while the humorously light heartedness found in others touched their hearts.

The exhibition and continued as the reception also featured Solo performances given by the talented poets and musicians who enhanced the enjoyment of the evening’s visual delights. After sharing some welcoming remarks, Paul Adam Smeltz (yeah that’s me) began the pleasurable task of introducing each recitation and performance. Sally Wiener Grotta began the performances with the sharing of her poetry which inspired and captivated all who heard it. She was followed by Emmitt Henry Derrick whose bluesy compositions and harmonica echoed the variety of styles The Forwardian Arts Society has become well known for. While his performance did not meet with everyone’s taste, it did contain several jewels awaiting to be appreciated by those who endeavored themselves to polish them.

The evening continued with a poetry reading given by Wayne Tuttle whose theatrical approach to his recitations entreated all who partook of it. He was followed by Rick Fisher whose voice touched each song he played with an uncommon quality which transcended the years he said that lapsed since he last shared his talents with others. More music followed his performance as Holly Avila and her guitar took their place. Her love songs enchanted those who heard them whether they knew the language they were written in or not while her songs addressing her political concerns of our day enraged and inspired many to activism. The Reception concluded with some closing remarks expressing a deep appreciation to all who made it wonderful.

However, many who attended the reception moved downstairs at its conclusion to participate in the Sarah Street Grill’s Open Mic Night. These included Crystal Gabrielle Martinez who was unable to perform during the Artist’s Reception due to technical reasons but was able to delight the audience with her considerable vocal skills. Rick Fisher also took the stage and shared his talents as well. The band “Forbidden Dreams” were also among the musicians who performed to the delight of their friends, fans, and music lovers in general. You’ll find more photographs taken during the reception and the Open Mic Night that followed in The Forwardian Arts Society 2011 Gallery at www.facebook.com/forwardian.dude.

In addition to gallery presentation of art and photography, The Sarah Street Grill offers an enticing cuisine served in a relaxed and inviting atmosphere. This atmosphere is enhanced by the musical entertainment available to their clientele along with events such as wine and beer tasting events and functions designed to benefit the financial needs of community minded endeavors. Please Explore The Sarah Street Website at www.sarahstreetgrill.com or call 570-424-9120 to lean more about the establishment and all it has to offer.

The next event to presented by The Forwardian Arts Society will be their Film Lovers’ Gathering to be presented at The Cheeky Monkey Coffeehouse located at 526 Main Street in Stroudsburg, PA near The Sherman Theater. This September’s Film Lovers’ Gathering tentatively scheduled to take place 7pm on Friday September 16th featuring a free showing of a film yet to be decided. The screening will be followed by a discussion of the film and those attending will be given an opportunity to suggest what film will be shown and discussed during the October gathering.

The “Forwardian Solo” exhibition being presented at The Sarah Street Grill began Wednesday August 17th and will continue until October 31st. The next visual arts exhibition to be presented by The Forwardian Arts Society is presently in the planning stages and information regarding it is hoped to be available soon. Please Explore The Forwardian Arts Society Website at www.theforwardianartssociety.com to learn more information about this and other events along with all they have to offer the creative community.