Falling to a Higher Realm 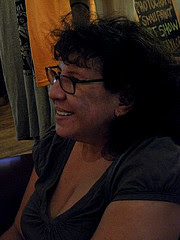 The Forwardian Arts Society hosted its monthly Film Lovers’ Gathering at The Cheeky Monkey Coffeehouse in Stroudsburg, PA on Friday August 19th. A small but eager group of film lovers came out to see the featured film which was titled, “The Man Who Fell to Earth.” The film is based upon the 1963 novel written by Walter Tevis but what made the 1976 film a cult classic has more to do with it being David Bowie’s film debut than anything else. You’ll find more photographs taken during the gathering in The Forwardian Arts Society 2011 Gallery at www.facebook.com/forwardian.dude.

The science fiction film (directed by Nicolas Roeg) and novel are about an extraterrestrial who lands on Earth in order to save his home planet from a devastating drought. His plan is to market his home world’s advanced technology in order to raise enough funds to help his people wither by (as in the novel) to ferry them to Earth or (as in the film) transport water to his planet. In either case, his plans goes awry when he becomes immersed in a sea of confusion and distractions after he is introduced to the elements of alcohol, sex, and television so prevalent in western society. This and the government’s desire to learn all about this stranger who has entered an even stranger land leads to his complete assimilation and his blindness to the hope of ever returning to his people to relieve them of their suffering.

Although the film did receive some mixed reviews when it was first released, it did (as mentioned earlier) become a cult classic. Many of the scenes were beautifully shot as it does have a certain surrealist quality to it which may have much to do with its 11 week shooting schedule. The film also contains a number of intellectual themes which are deserving of attention as they’re still relevant today. And, then there’s David Bowie. To me, the most interesting thing about the film was seeing someone walking around in 1976 with orange hair. Not to say the rest of the film was without any interesting scenes, but seeing something that is now commonplace occurring 35 years ago did get my attention.

Another aspect of the film to be noted is it’s graphic depiction of sex. Although I’ve seen the film shortly after it was released, I was surprised by it. I must have seen a cleaned up version of the film. It did border on being pornographic but did not allow sex to be a prominent element of the film. Instead, the scenes depicting sex merely served to illustrate one of the many distractions the David Bowie character encountered which keeps him from fulfilling his mission. The scenes relating to sex were disturbing and uncomfortable to watch but so were the scenes relating to alcohol and television. Perhaps this is why many have considered “The Man Who Fell to Earth” an art film as art is said to be at its best when it “Comforts the disturb and disturb the comfortable.”

The Cheeky Monkey Coffeehouse offers a variety of coffee, drinks, and culinary treats along with events such as the one described in this article. The next Film Lovers Gathering held at The Cheeky Monkey is tentatively scheduled for Friday September 16th. Future events will include an Artist’s Reception on Friday September 2nd featuring the work of Kim Pollard beginning at 6pm as part of their Espresso Yourself Art Shows Series. This Exhibition continues until November 1st. Ongoing events at The Cheeky Monkey include their Tuesday evening Open Mic Nites and their “Spoken Word Symposium” on Thursday evenings. Please Explore The Cheeky Monkey Coffeehouse Website at www.cheekymonkeycoffee.com or call 570-420-8222 for more information.