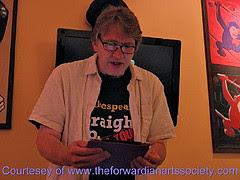 The Cheeky Monkey Coffeehouse in Stroudsburg, PA hosted The Pocono Shakes presentation of their “Screening Shakespeare” Movie Night on Saturday August 13th which featured a free screening of the 1998 Academy Award Winning film titled, “Shakespeare In Love.” The viewing was preceded by a talk given by Pocono Shakes founder Richard Rose which enhanced the enjoyment by providing a historical backdrop to all that occurred within it.

As mentioned earlier, “Shakespeare In Love” received an award from The Academy of Motion Picture Arts and Sciences (AMPAS) for best picture as well as “OSCARS” for Gwyneth Paltrow (Best Actress), Judi Dench (Best Supporting Actress) and in several other categories. There are few who would argue these and other kudos are well deserved except for those who later sued the film makers writers claiming the film’s script was lifted from their work but were later declared to be frivolous.

In spite of these controversies, the film is an enjoyable one to be watched. It has the wonderful quality of teaching the history relating to the Elizabethan Theatrical Era while remaining entertaining. It does this by actually utilizing many comedic devices found in a Shakespearian play. These include mistaken identity and the “Play within a play” effects. However, the film does not shy away from utilizing modern day clichés in order to elicit a chuckle from its film going audiences.

An example of this can be seen in a scene in which Shakespeare is chasing an (what he believes to be) an actor whom he wants to be in his play, “Romeo and Ethel, the Pirate's Daughter.” The object of his pursuit enters a boat and the oarsman begin taking his passenger across the river. Shakespeare quickly jumps into another boat and tells his oarsman to, “Follow that boat” which mimics the well worn cliché of “Follow that cab” seen in numerous action films throughout the 1940s and 50s.

However, comedic devices aren’t the only Shakespearian qualities found within the film. There are dramatic and romantic reflections of his work to be seen as well. Not only do they move the story forward, but they profoundly demonstrate the bard’s ability to touch the human heart with tears of both joyous laughter and empathetic sorrow almost 500 years after his work was written. This makes the film more than a biography of the man but a tribute to his wonderful gift for words.

And yes, it is duly noted the film is entirely fictional and can’t be really considered biographical. Yet, there are those who assert the art of fiction often holds more truths than the presentations of fact and this film embarks upon a journey to prove the validity of this assertion. It does so by sharing historical information about William Shakespeare, his contemporaries, and the day to day tasks and challenges those who chose a life in the theater encountered in the Elizabethan Era which took place from 1558 to 1603. So, while the main plot of the film holds many untruths about the relationship between Shakespeare and his love (and few would be surprised if it was discovered to be true due to his philandering reputation), the film has an abundance of the reality of the times so it may share its truths.

The film, “Shakespeare in Love” was directed by John Madden and written by Marc Norman and playwright Tom Stoppard. It features Joseph Fiennes as William Shakespeare and Gwyneth Paltrow as Viola de Lesseps along with numerous well known actors and actresses. Although I’ve seen the film when it first came out in theaters, it was a joy to see it once again accompanied by Richard Rose’s insightful commentaries. The atmosphere was a very congenial one which made everyone feel they were sharing a wonderful experience among friends.

The Pocono Shakes presentation of their “Screening Shakespeare” Movie Night is said to be the first of such events and met with a respectable measure of success. Thus, its completion left many eager to learn when the next installment will occur so they can make arrangements to attend. You’ll find more photographs taken during the event in The Cheeky Monkey 2011 Gallery at www.facebook.com/forwardian.dude.

Pocono Shakes is a newly formed theatre company involved in education and performance of the works of William Shakespeare who lived in from the mid 1560s until 1616 in who has written over 30 plays during his lifetime. Pocono Shakes seeks to perform Shakespeare's texts in order to demonstrate their relevance to a modern audience. The next event presented by Pocono Shakes will be there production of William Shakespeare “Macbeth” scheduled to be performed at The Miller Park located in East Stroudsburg, PA September 8th - 11th and September 15th - 18th along with additional performances to be presented at The Shawnee Playhouse in Shawnee on Delaware, PA November 4th - 14th. You’ll be able to gain more information about Pocono Shakes and all they have to offer by contacting them at poconoshakes@gmail.com or by visiting their page on Facebook at www.facebook.com/poconoshakes.

In addition to hosting The Pocono Shakes’ “Screening Shakespeare” Movie Night, The Cheeky Monkey Coffeehouse is currently presenting The Laura Bee Exhibition which continues until September 1st as part of their Espresso Yourself Art Series. The next exhibition in the series will feature the work of Kim Pollard and begin with an Artist‘s Reception on Friday September 2nd beginning at 6pm and will continue until November 1st. In the meantime, Cheeky Monkey will host The Forwardian Arts Society Film Lovers’ Gathering on Friday August 19th beginning at 7pm featuring a free screening of the 1976 Science Fiction Cult Classic “The Man Who Fell to Earth” starring David Bowie which will be followed by a discussion of it. Those who attend the gathering will be afforded the opportunity to suggest what film will be shown during their September get together. The Cheeky Monkey Coffeehouse also offers a variety of coffee, drinks, and culinary treats along with events such as the one described in this article. Please Explore The Cheeky Monkey Coffeehouse Website at www.cheekymonkeycoffee.com or call 570-420-8222 for more information.

This sounds like a movie I would really enjoy! I'm such a fan of theatre and love reading and watching Shakespeare!