A Park Flourishes with the Classics 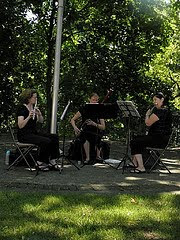 The Jacob Stroud Corporation presented Calliope on Saturday August 20th at The Dreibe Freight Station in Stroudsburg, PA as part of their Music in the Park Series. A small group of music lovers gathered to listen quietly to the gentle classical fare. The selection included pieces composed by the 18th and 19th century masters such as Beethoven, Mozart, and Handel as well as 20th century works by Gershwin, Copeland, and Berlin. However, regardless of when the pieces were written, musicians Gina Bertucci, Barbara Mahon, and Laura Goss brought them alive to be enjoyed by a modern audience through their considerable talents.

The music, the musicians, and the cool breeze that enlightened the afternoon all served to enhance the charm of the concert. The light reflecting off the nearby stream onto the leaves of the trees situated behind the performers made for a magical backdrop as one could imagine the spirits of the composers were dancing to the tunes they created. They must have enjoyed the renditions of their work as much as those who attended the concert. You’ll find more photographs taken during the concert in the Music in the Park 2011 Gallery at www.facebook.com/forwardian.dude.

The Dreibe Freight Station was built in 1882 and serviced shipments traveling along the New York, Susquehanna and Western Railroad. In now serves as an art gallery to showcase the collections of the Monroe County Historical Association. Special exhibits by local artists are offered throughout the year. Please Explore The Monroe County Historical Society Website www.monroehistorical.org for more information about the Station and to learn more about the history of the area.

The Jacob Stroud Corporation was formed in 1995 in order to revitalize the downtown historical heritage. They continue to establish a healthy downtown environment for residents and visitors to the area. The next performance in their Music in the Park Series will feature The Great Swamp Blues Band at The Dreibe Freight Station on Saturday August 27th beginning at 12 noon and will be the final concert of the series for 2011. However, a festival celebrating all things relating to the town of Stroudsburg, PA will take place Saturday September 3rd. The Annual “Stroudfest” event will feature entertainment throughout the day along with opportunities to explore and purchase works created by local artists, artisans, and crafters. Please Explore The Stroudfest Website at www.stroudfest.com for more information. To gain more information about The Jacob Stroud Corporation and all they have to offer the community as well as its visitors, Please Explore their Website at www.stroudsburg.net.