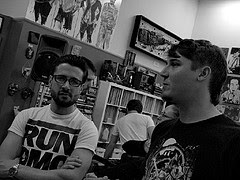 The Main St. Jukebox in Stroudsburg, PA held an Artist’s Reception featuring the art of Earl Kess on Saturday June 4th with musical guest The Great Socio. While Earl Kess is best known for creating the monthly screenings of blood curdling horror (and horrific) films shown during the Severed Sinema Series presented at The Sherman Theater, he is also known for his work in designing posters for a variety of events. These designs not only create a mood of anticipation in those attending the events, but it also has been known to inspire the performers to enhance their presentation in order to meet up to the creative standards set by the artwork.

The work is quite impressive and does not limit itself to depicting just concert and other events. Although, when one does look at such a poster, one thinks about buying a ticket even though the show took place several years ago. The other works, not geared towards promoting a particular event, presents a number of simplistically intricate designs which are pleasing to the eye.

However, the exhibition reminded me of the film, “The Cabinet of Dr. Cagliari” in which the opening scenes of the film (which is told in flashback) are shot utilizing normal looking settings. The main part of the film features a more expressionistic setting denoting the mentally disturbed attributes of Dr. Cagliari and the monster he creates. The film ends with the characters seen in the beginning basically saying how it all worked out ok but the setting resembles that appearing throughout the film.

The exhibit reminded me of the film because it has a tendency to draw the viewer in with its eye pleasing designs and which seems to be a device to bring a viewer into a darker and more disturbing place as one begins to explore the numerous jagged edges found in many of the pieces. We somehow become a part of the image we’re viewing experiencing all its demented qualities. We do eventually come away from the work reminded that everything is ok, but the images remain in our heads making us wonder if this is really so. This gives us a deeper insight into our minds and the one that originated the popular local film series. Hmmmmmm.

The music for the Artist’s Reception was provided by The Great Socio who consist of Alberto Muñoz on Trumpet and Vocals, Craig (The Madman) Stenger on Bass guitar, Matthew (Monty) Montgomery on Piano/Organ/Synthesizer, and Nick Marinakis on drums. According to their website, the band has been described as “The Millennium Doors.” Those who were present for the performance said they were fantastic. Unfortunately, I arrived late so I missed the show. But, those who told me how it was are those from whom I can take their work for what they say as being true. You’ll find more photographs in the Main Street Jukebox 2011 Gallery at www.facebook.com/forwardian.dude.

In addition to the Art Exhibitions held at The Main Street Jukebox, they offer recordings made on CDs, Tapes, and Vinyl. The Earl Kess Exhibition continues until June 24th. The Next Exhibition will begin with an Artist’s Reception on Saturday June 4th and continue until July 29th. Please Explore The Main St. Jukebox Website at www.myspace.com/mainstjukebox or call 570-424-2246 for more information about these events and all they have to offer.
Posted by Unknown at 7:08 PM