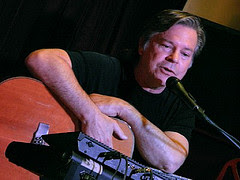 The ArtMusic Coffeehouse in East Stroudsburg, PA present Robb Taylor who performed on guitar and keyboard on Saturday June 25th alongside bass guitarist Don Young. The audience filled a medium sized portion of the home of Don and Jan Slepian as they waited for the evening’s performance to begin. Conversations of every variety ensued until Don took his customary place behind the keyboards to perform an improvised musical interlude that relaxed the gathering as they prepared their spirits to embrace what was to come soon afterwards.

Soon, their wait was over as those who were present found the duration of time spent between their arrival to their experiences of the musicians’ first notes was very worthwhile. The subtle power of the lyrics combined with melodies emanating from the instruments sent a warm reassuring message to the soul. An inner smile could be seen reflected upon the faces of those sitting in their chairs along with a glint in their eyes while they listened to the performance. It was a soft and gentle performance which gave much comfort to those who witnessed it. You’ll find more photographs taken during the concert in The ArtMusic Coffeehouse 2011 Gallery at www.facebook.com/forwardian.dude.

The serenity found within Robb’s performance can be considered a stark contrast to the life he lived during his early years. He grew up in several foster homes and encountered abuse in a number of them. According to his website, this lack of loving and stable environments led to a low self esteem and a great sense of insecurity. Although such conditions often cause an individual to become embittered, Robb found a beacon within himself to allow his experiences to provide him with a greater understanding of the human condition which he continues to manifest in his adult life.

The Robert Taylor Foundation for Children is just one of the avenues he pursues to allow his live to reflect the greater understanding he gained throughout his childhood experiences. This foundation was formed to purchase medical care for handicapped children and to help remove children from an abusive environment and place them into a more loving one. In addition to this, the foundation also helps provide children in need with the basic necessities of food, clothing, and shelter to they can survive the hardships they find themselves in. You can learn more about The Robert Taylor Foundation for Children along with his other noteworthy interests which includes motivational speaking tours, theatrical performances, books for children, and upcoming musical performances at www.robbtaylor.com.

The ArtMusic Coffeehouse is held in the home of Don Slepian and Jan Julia who reside in the borough of East Stroudsburg, PA as part of the Concerts In Your Home Series. A variety of musical forms are presented including folk, jazz, classical, and electronic music. Although the concerts welcomes all who wish to attend, seating is limited as it they take place in a private home. The Next The ArtMusic Coffeehouse Concerts will feature Rupert Wates on Friday July 8th and Marc Black on Saturday July 23rd. They begin at 8pm. Please Explore The ArtMusic Coffeehouse Website at www.ArtMusicCoffeehouse.com or Call 570-476-630 for more information and to reserve your seats.
Posted by Unknown at 4:15 PM