Juiced Jazz Served at The Gazebo 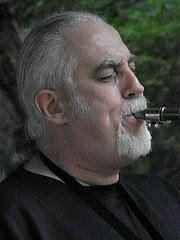 The Presbyterian Church of the Mountain (PCOM) in Delaware Water Gap, PA presented Jazz Juice featuring Vinny Bianchi on Saxophone, Bill Washer on Guitar, Paul Rostock on Bass, and Daniel Gonzalez on Drums on Sunday June 12th as part of their Summer gazebo Concert Series. A small group attended the concert which was pleasing to the ear of the jazz lovers who came to the outdoor concert in spite of the predictions of stormy weather. Yet, the moisture felt in the air did not effect the atmosphere of the relaxed enjoyment found within the notes played by this quartet.

The music was smooth as the musicians squeezed only the most delectable juices from the tunes they served. Many servings derived from the jazzy fruits familiar to the audience while others were not. However, the performance demonstrated how embracing a new endearment can enhance the experience of living. This was reflected by the sale of refreshments and a new cookbook developed by the PCOM containing a variety of recipes designed to please any palette.

The 90 minutes allotted to the weekly concerts was cut short about 20 minutes due to an incredibly forceful outbreak of the storm that was promised. Although many felt the keeping of this promise could have best remained broken, the enjoyment the much provided carried over to the laughter and good will among those who hurriedly folded up their chairs and ran for a dry shelter. Some of the older jazz lovers joked about how this wasn’t the first time they ignored warnings of a big rain storm. The first time was the warning they received from Noah.

As the storm abated, the drenched gathering moved toward their cars and began their journeys home. However, it was overheard many were looking forward to the next performance in the Gazebo Concert series. You’ll find more photographs taken during the Jazz Juice Concert at The PCOM Summer Gazebo Concerts 2011 Gallery at www.facebook.com/forwardian.dude.

The next musical performance presented in their Summer Gazebo Concerts will be The Eric Mintel Quartet on Sunday June 19th beginning at 6pm. The concert is free and open to the public. Please Explore The Presbyterian Church of the Mountain Website www.churchofthemountain.org call 570-476-0345 for more information about the concert and all they have to offer the community.
Posted by Unknown at 1:40 PM