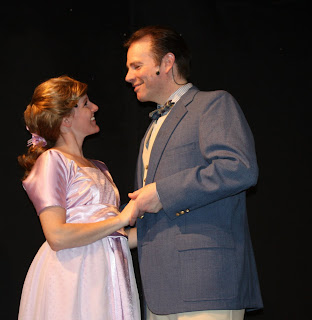 The Shawnee Playhouse in Shawnee on the Delaware, PA is currently presenting their production of “The Music Man” by Meredith Wilson based on a story he and Franklin Lacey has written. The play was first performed in 1957 on Broadway and soon became a sensation leading to over 1000 performances along with the acquisition of several Tony Awards including one for Best Musical.

After several revivals, the play became even more popularized in 1962 when the film starring Robert Preston as Harold Hill and Shirley Jones PPF (Pre Partridge Family) as Marian Paroo was presented. The film was equally successful and highly acclaimed by critics. This was followed in 2003 by a remake of the film made for “The Wonderful World of Disney” with Matthew Broderick as Professor Harold Hill and Kristin Chenoweth as Marian Paroo. Although it proved to be popular according to the ratings shares, it was not well liked by several critics.

The play itself is set in a small Iowa town named “River City” in the July of 1912. It begins on a train in which we observe several traveling salesmen chatting about their trade. This scene is a very interesting one as a rhythmic a cappella dialogue mimicking that of a train’s movement creates a mesmerizing composition not common to most musicals of the time. This sets the tone of expectation this musical will be something very different.

The play is about a con man known as Professor Harold Hill (as portrayed by Brian Bowman) who enters the town intent on swindling its citizenry out of their money through a scheme involving the creation of a marching band to placate the fears he creates for them. He soon convinces the town’s people the newly established pool hall will lead to juvenile delinquency and giving the youth the opportunity to be in a marching band will curtail such tendencies. His plan is to solicit funds from the citizens to purchase musical instruments which they do receive and expensive band uniforms which they won’t receive until he’s well out of town with their money.

However, there is a hitch to Professor Hill’s plan. He doesn’t know much about music and a young Librarian named Marion Paroo (as portrayed by Sara Ferguson) can expose his fraudulent claims as she is also the town’s music teacher. Undaunted, Professor Hill proceeds to play upon the vanity of those he encounters by convincing them they have remarkable musical abilities while pursuing Marion in hopes his charming demeanor will woo her into overlooking the obvious flaws in his musical techniques.

She is resistant to his advances but they are of no avail. This is especially true when she complains to her mother (as portrayed by Amy Rau) a man (Harold Hill) has been following her all around the town only to be advised she should be nice to him and seek a romantic relationship with him that will lead to marriage. This reviewer supposes this was a good idea at the time (1912).

However, Marion’s resistance dissolves as she finds herself falling in love with the enigmatic Professor in spite of (or maybe because of) discovering he is a fake. She sees the positive changes he created in the town while allowing its people to believe in themselves in ways they never considered before his arrival. He begins to see it as well and falls genuinely in love with her. The climax of the play is when he is about to be held accountable by the town’s people as they discovered his charade and a fully dressed marching band manifests itself to everyone’s (including Professor Hill) surprise. He leads the band into a rendition of Beethoven's Minuet in G which overwhelms the parents with joy in spite of their inability to find many of the notes.

“The Music Man” is filled with an abundance of great songs. This was true of this production as well even though the sound of seventy six trombones are not quite the same as a keyboard with a synthesizer. The acting was quite good as was the casting. In fact, the cast looked as if they actually lived during the time the play took place. There was a certain look in their faces that remained constant throughout the play which is somewhat difficult to maintain especially among young people (including children) which were a good portion of the cast. The acting was spot on as was the staging. This made the entire experience of watching this production of “The Music Man” a very enjoyable one.

Besides the basic plot of the play described earlier, there are some interesting subtexts that could be derived from it. The play begins on July 4th 1912 with all the patriotic fervor associated with that date. Harold Hill manipulates their fears of change in the status quo by suggesting the youth will begin to do things differently. He proposes the establishment of a Marching Band so the young will be uniformed and comply with community standards. This may be considered a stretch in interpretation of the play, but this reviewer can’t help but see the similarities this approach to con the citizens of River City is to those employed by political leaders to manipulate their countries. It just makes this reviewer go “Hmmmmmm.”

Regardless of how one sees this production of “The Music Man,” it is a play to be seen and enjoyed. I would highly recommend it for those who like good theater done well. The acting is good and the performances reflect the qualities that made the play so memorable in the first place. One can easily see why “The Music Man” received so much critical acclaim and numerous awards by watching it at The Shawnee Playhouse. In other words, it’s a damn good show and one of the best of the season so far.

The Shawnee Playhouse production of “The Music man” by Meredith Wilson was directed by Carmela Mayo (who also served as the production’s choreographer) and Staged Managed by Byrdie Jacques. Scot Cleaveland served as the Production’s Set Designer and Technical Director as assisted by Eric Dwyer who also served as Light Designer. The Sound Technician was Stephen Sury while Kevin Hillmann served as Property Master with Philip Benefield as Tech Crew. Keyboards for the production were played by Kyle Donahue while Missy Benefield served the production as its costumer. The Shawnee Playhouse producers are Ginny and Charlie Kirkwood with Midge McClosky serving as the playhouse‘s Executive Manager. Group Box Office Sales of their productions are handled by Mary Horn as assisted by Becky Haskell. Barbara Ross, Christina McManus, and Ariel Hudak serve as the Box Office Staff. Amy Cramer serves as The Shawnee Playhouse’s Publicist.

Photograph provided by The Shawnee Playhouse.
Posted by Unknown at 9:11 PM

excellent points and the details are more specific than somewhere else, thanks.