The Soul finds a Home 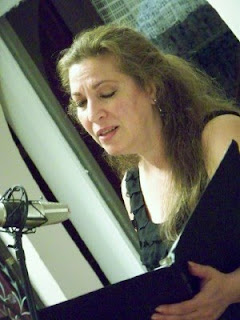 A modest gathering of music lovers came together in the home of Don and Jan Slepian located in East Stroudsburg, PA on Friday June 25th to enjoy their monthly ArtMusic Coffeehouse concert. This month, attendees were treated to the passion and emotional depth found in Classical and originally composed music as they were presented by Keyboardist, Composer, and Maestro Spiro Cardamis and Soprano Julie Ziavras. The exquisite blend of music and voice made the evening an elusive one for words to describe as it communicated through the language of the soul.

As customary, host Don Slepian opened the evening with some original improvised compositions of his own. However, he was joined by Spiro Cardamis who enhanced the opening with his own inspired interpretations. It was soon afterwards that those attending began to experience the passions found in the featured artists’ performance. This passion was not only felt in the music, but in they way Spiro Cardamis and Julie Ziavras talked about the work and the translations from the original text. An excitement filled their voices and it proved to be very contagious.

As also customary, the environment of the Slepian home was congenial filled with friendly faces, warm conversation, plentiful refreshments, and carousel horses. Their home has this “Welcome All” feel to it and this was especially true to a special guest who attended this month’s concert via the internet. Spiro Cardamis’ brother experienced the entire evening through his webcam from his home in Greece. It was interesting to contemplate how a tradition established long ago by people who had the desire to entertain their neighbors has evolved by utilizing 21st century technology to include the world in their neighborhood. This led to a further contemplation on how everyone is touched by all the arts even if they’re unable to physically hear, see, or touch the forms as art communicates on such a level it becomes a part of all humanity without any conscious effort to receive it. You’ll be able to find out more information about Spiro Cardamis at www.spirosmusic.com. Information about Julie Ziavras who with Ken DeAngelis perform as an acoustic folk duo and presented an impromptu after show concert can be found at www.kenandjulie.com. You’ll find more photographs at The Forwardian Arts Society ArtMusic Coffeehouse Series 2010 Gallery.

The ArtMusic Coffeehouse presents concerts taking place in The Slepian home in East Stroudsburg, PA on a monthly basis and features a variety of music designed to enhance those who attend. Thier next concert will feature the music and poetry of Holly Avila on Saturday July 17th beginning at 8pm. Information on Holly Avila can be found at www.myspace.com/blueplanetplanetaazul. Since the concerts are held in a private residence, there is a limitation in regards to space provided for attendees. Therefore, reservations are required. To reserve your place at the next concert and/or to learn more information about the series, please Explore The ArtMusic Coffeehouse Website at www.ArtMusicCoffeehouse.com or call 570-476-6307.
Posted by Unknown at 1:58 PM