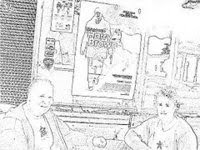 The film “Harry Brown” had its World Premiere as a "Special Presentation" at the 2009 Toronto International Film Festival and late was released in the UK and later in the US this year. Upon hearing about the film prior to seeing it, this reviewer could not help himself but to think about a recent film with similar aspects in its plot made in 2008. The film I’m referring to is Clint Eastwood’s “Gran Torino.” Both films are about an aging war veteran who deal with local gangs. Although the Michael Caine’s Harry Brown character and Clint Eastwood’s Walt Kowalski turns to violence to solve their problems, the similarities end there.

This might be due to the difference how the US film industry approaches a subject than other countries. Clint Eastwood kicks gang members’ butt with great bravado while Michael Caine meets with some success in dealing with his foes but not quite as gracefully as someone in a US Action film would. He has all the foibles any elderly person would and this brings a degree of reality to the film lacking in the counterpart this reviewer mentioned.

Comparisons aside, “Harry Brown” establishes itself as a very gritty crime drama from the very first frames of film. It opens with a gang initiation in which a new member is given drugs and a gun. He then goes on a killing spree murdering a young woman who is walking with her infant son in a carriage. He and his friends speed away only to be killed by a motorist they neglect to see. The angry narcissism and the desire to live a fast paced life is felt throughout these opening sequences as is a feeling of revulsion of what the characters are portraying.

The film soon introduces the audience to Harry Brown who is an older man and has become orderly in his approach to life. He is slow and deliberate in his actions as he maintains the long term relationships he has established over the many years of his life. This is even true of his daughter who passed away in the 1970s and that of his recently departed wife. It is only when his closest friend is killed by a gang does he foregoes his promise to his wife to leave his military approach to life behind him and takes arms against his friend’s murderers.

The contrasts between gang life and that of those like Harry Brown creates an interesting tension throughout the film. It caused many to walk out during it and some has noted this was the worst film they have seen in quite some time. Although this reviewer agrees the film was disturbing as the violence was over the top. It’s also true the characters in the film have very little redeeming traits leaving the audience uninspired by what the film presents. However, the fact the film refuses to flinch during it’s most violent episodes and it’s disregard to how anyone looks to the audience makes the film very interesting to this reviewer.

The film is almost as narcissistic as the gang members it presents but it also has a degree of reflection found in the maturity of Harry Brown. The film also reminds its audience criminally violent behavior isn’t only delegated to the young nor is compassion a traits solely possessed by the old. This, perhaps, was an aspect of the film most disturbing as it asks the audience to contemplate if the distance between them and the gang members depicted in the film are all that far apart. This is a hard pill to swallow and our desire to deny the possibility makes it all the more harder to do so.

The film ends with the area Harry Brown lives quite and peaceful. Harry is seen walking into a tunnel where the gangs frequented. The film fades to black as he enters leaving the audience with a sense of ambivalence. Is the tunnel safe for him to travel through or are there gangs still lurking in the shadows? And, if Harry does encounters a gang member, who is the more dangerous of the two?

“Harry Brown” is rated R and is being shown at The Pocono Community Theater in East Stroudsburg, PA. For information regarding times of this and other films currently being show at the theater, please call 570-421-3456. Most films run one week but some films may be held over for an additional week or two depending on ticket sales.

After the Friday June 4th showing of the film, The Forwardian Arts Society Gathered in The Pocono Community Theater’s Café to chat about it. The turnout was minimal but the conversation was quite agreeable although the quality of the film was disagreed upon. But, none left with a desire to wreck violence on others participating in the discussion. You’ll find photographs from previous discussions in The Forwardian Arts Society Film and Chat Gathering 2010 Gallery at www.myspace.com/forwardian_arts. We invite you to join us Friday July 2nd to watch a film and participate in an equally stimulating and peaceful conversation. Please contact me through my profile for more information.
Posted by Unknown at 9:24 PM