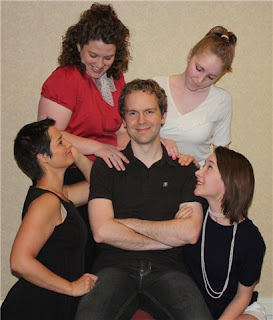 The Shawnee Playhouse in Shawnee on the Delaware, PA presented The Worthington Players production of “Manhattan Casanova” by Jenny Lyn Bader. Although the play is billed as a comedy, it isn‘t all that funny. It’s sort of like a Woody Allen film. It has some funny lines, it is well written, the acting and directing is exceptional, but it doesn’t inspire a lot of laughter. This doesn’t mean it isn’t good, it just means it really isn’t a comedy. It’s more like drama with slightly more than the usual amount of comic relief.

The play is about a Psychiatrist named Charlotte (as portrayed by Tracy Goss) who (against her better judgment) becomes romantically involve with John (as portrayed by Martin Neal who also served the production as its sound designer) whom by all accounts of her friends and patients to be a womanizing “Casanova.” As the relationship progresses, it’s discovered Charlotte has as many lovers as John and decide to abandon all “others” in order to remain true to each other. It is soon afterwards Charlotte realizes she is in love with John and he leaves.

This abandonment led to a very poignant moment at the end of act one. Ms. Goss expression of her despair is very subtle yet it reached into the heart of everyone who heard her muffled sobs. The lighting enhanced this as a shadow engulfed her so the audience could only focus on the sound. While the acting of the cast were of a very high quality, this one moment is very worthy of special attention as it adds a dimension of the character not seen throughout the play previously. One can tell a great deal of thought went into how this moment should be presented and recognition should be given to the actress, director, and technical crew who contributed their talent to it.

As said earlier, the cast of Jenny Lyn Bader’s “Manhattan Casanova” were excellent and contributed to the play being enjoyable. In addition to those mentioned so far, the remainder of the cast consisted of Nicole Dietze as Eva, Kate DiGerolamo as Anne, Stephanie Reyes as Pam, and Kyra Walters as Nicki. Each character added a dimension to the play beyond serving as vehicles to move the plot along. Their conversations with Charlotte revealed deeper realms of her nature and their descriptions of John revealed how perceptions often don’t reflect the depth of what we perceive. And, while these conversations continue throughout the play, the audience peers into their lives and soon discover aspects familiar to their own.

The Worthington Players production of “Manhattan Casanova” by Jenny Lyn Bader was directed by Sara Ferguson and Stage managed by Kevin Hillman. Michael Eyth designed the sets while Travis Southard was the Sound Technician and Emily Cioc was the Sound Technician. The producers were Ginny and Charlie Kirkwood. The Shawnee Playhouse Executive Di4rector is Midge McClosky and The Group Sales of their productions are handled by Mary Horn as assisted by Becky Haskell. The theater’s Publicist is Amy Cramer.

This production of “Manhattan Casanova” by Jenny Lyn Bader continues its run at The Shawnee Playhouse in Shawnee on the Delaware, PA until May 30th. Although there isn’t much laughter to be found in this “comedy,” the poignancy of this play makes it a meaningful evening at the theatre that should not be missed. Therefore, this reviewer highly recommends seeing it. The next Shawnee Playhouse presentations will be The Gong Sow on Friday June 4th, “Mysterrio’s Magic Shows for Kids” June 4th - July 3rd, “Id, I do” June 4th - September 3rd, “The Music Man” June 18th - August 28th, “The Last of the Red Hot Lovers” July 2nd to September 5th, “Willy Wonka Junior” July 8th - August 28th, and “The Secret Garden” July 16th - August 29th.

Photograph provided by The Shawnee Playhouse depicting the cast of “Manhattan Casanova
Posted by Unknown at 1:21 PM