Penna and Carr at The Jukebox 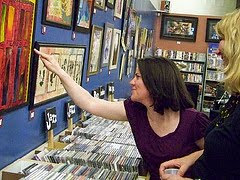 The Main Street Jukebox in Stroudsburg, PA held an Artists’ Reception on Saturday May 1st featuring The Art of Victoria Penna and Marty Carr along with music provided by Dewey Decimal and the System and Mad Lucas. A sizable crowd gathered at the record store to be entreated by the images and sounds that greeted them. They were not disappointed as the work of the artists captured their imagination while the music excited their bodies with its beat.

The pieces presented by Marty Carr were varied and touched upon many themes. One of particular interest was a depiction of a door with faint shadowy images seen through its widows. The inscription within the painting read something to the effect how precious the state of privacy was. One began to wonder if the closed doors were affording privacy to those we could barely see or to guard our privacy from them. The ambivalence of the work served to draw the viewer in through their ponderings as did her other works in similar manners.

Some of the pieces presented by Victoria Penna depicted spiritual themes of eastern persuasion in a new and intriguing way. This added a fresh interpretation to the significance of the deities transcending the traditional understanding of them. Other works allowed the viewer to utilize their imagination while admiring the Asian influence on her stylings. They reminded one of the Japanese form known as Anime but it went beyond the medium. Ms. Penna brought new to the form through her unique eye and talent expanding its boundaries.

The event was enhanced by the music of Dewey Decimal and the System and Mad Lucas. Their loud, kick ass music filled the room shaking its walls while slapping the listeners silly to their joy. If there were more room to dance, there would be dancing. But, most were content to listen while dancing within their heads as the rhythm moved them. The Exhibition continues until May 30th. You’ll find more photographs at The Forwardian Arts Society Main St. Jukebox 2010 Gallery at at www.myspace.com/forwardian_arts.

In addition to Art Exhibitions and Concerts, The Main Street Jukebox offers recordings made on CDs, Tapes, and Vinyl. Their next event will feature The Art of Nicole Hammond and Andrew Diehl with an Artists’ Reception to be held Saturday July 3rd beginning at 6pm. Please Contact The Main St. Jukebox at 570-424-2246 for more information about these events and all they have to offer.