Playing with the Lyrical 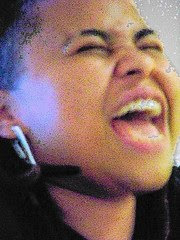 The Cheeky Monkey Coffeehouse in Stroudsburg, PA presented an early evening Spoken Word Performance on Sunday May 23rd featuring The Lyrical Playground. Their performance was preceded by an Open Mic Event and the very first recorded Poetry Slam outside of a festival setting to take place in the Monroe County, PA region. This initiation promises to become a regular event at The Cheeky Monkey on a night yet to be determined.

The evening began with a Spoken Word performance by members of Urban Mountain Voices (UMV) who have become well known throughout the area for providing substantive poetry indicative of the style they adhere to. This was followed by an Open Reading in which members of the audience were invited to “Spit” their soul’s words onto an eager audience. Then, after a brief intermission, The Lyrical Playground performed as everyone became astounded by the power of their words which grabbed, slapped, and instilled their urgent meaningfulness into each ear and eternal substance that heard them.

The Lyrical Playground recently received a grant from Usher philanthropic foundation to tour the region and it was fortunate to have Tricia McGarvin-Fernandez (founder of Urban Mountain Voices) to have discover this and to invite them to the area. The evening concluded with a question and answer period followed workshop led by The Lyrical Playground. You’ll find more photographs in The Forwardian Arts Society Cheeky Monkey 2010 Gallery at www.myspace.com/forwardian_arts.

The Lyrical Playground is a group of poets from Philadelphia, PA who formed a non profit organization in 2008 designed to teach young teens the art form of poetry. Urban Mountain Voices (UMV) is based in The Monroe County, PA area (aka the Poconos). The group provides young people an opportunity to express themselves in an open and honest manner through the medium. The group meets every Friday beginning at 4:30pm on the East Stroudsburg University (ESU) of PA Campus and welcomes young people between the ages of 13-20 regardless of their race, gender, sexual orientation, religious affiliation, or academic standing.

Websites of those mentioned in this article include The Lyrical Playground at www.thelyricalplayground.com, Urban Mountain Voices at www.urbanmountainvoices.org, and The Forwardian Arts Society at www.theforwardianartssociety.com.
Posted by Unknown at 12:40 PM