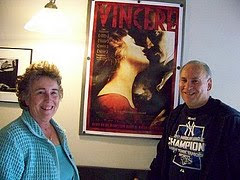 “Vincere” (which means “Win” in in the Italian Language) was the only Italian film in competition at the 2009 Cannes Film Festival and won four Awards at the Chicago International Film Festival including a well deserved one in Cinematography. The film is based on the life of Ida Dalser who bore Benito Mussolini a son prior to World War One and claimed to be his wife. Her tragic life is detailed as she endeavors to gain recognition for herself and son as Mussolini’s wife and son leading them both to be admitted to mental institutions and their eventual suicides.

The film opens at Dalser and Mussolini’s meeting which occurred during a political meeting in which a young Mussolini took a watch and claimed, if he was not struck down in five minutes, God did not exist. Dalser is seen impressed by this boldness and the two later begin a very sexual affair. They lose touch as Mussolini joins the army to participate in the war until she discovers him humbly accepting praise from the King whom he’d spoken so ardently against in his political speeches. She also discover he had married and had a daughter since they saw each other and thus begins her tragic journey. A few things about the film itself struck this reviewer while watching it.

The first was the intricate beauty of the cinematography. It’s style was very reminiscent of the Neo-realistic films made in Italy after World War Two. The most notable of these films include Rossellini's “Open City” and Vittorio De Sica’s “The Bicycle Thieves.” There were also hints of Federico Fellini’s work throughout which served to enhance its already impressive imagery. It is interesting to note these approaches to film making in the Italian Cinema began after the death of Benito Mussolini and would have never been made during his rule as his Fascist Regime heavily censored the film industry forbidding such honesty to be presented.

The second aspect of the film which intrigued this reviewer was that is was about (although indirectly) Benito Mussolini. It brought to a realization we know very little about the other leaders of the Axis Powers during World War Two. We see shows on the Discovery, History, and Military Channels about Adolph Hitler all the time. We know everything about his. We know about his medical condition and his diet which led to an abundance of gas. We know about his family and his dog. But we know very little about his Allies Benito Mussolini of Italian Colonial Empire and Hirohito aka Emperor Showa of The Empire of Japan. It was interesting to see how Mussolini came to power and how he exerted his rule. This was not what the film was about, but these elements of his life were there to satisfy the curious.

There are many things one can say in praise of this film as it leads the viewer to many terrains both intellectually and emotionally. But, this reviewer feels it suffices to say it is a very visually stunning film with deep compelling characters. To say it is well directed and acted is an understatement, but words cannot really do justice to this film and one would really have to see it to appreciate it fully.

However, there is one particular aspect of the film this reviewer would like to focus upon. It is the constant weaving of the film’s narrative between one time period to another. In one moment, we are watching a scene taking place before World War One. In another moment, we are in 1935. And, in another moment, we are witnessing the fall of Mussolini in 1945. It is during this later sequence we return to the meeting in which Mussolini and Dalser met to see the watch completing the five minute deadline Mussolini set for God to strike him down. This reviewer knows “hmmmm” isn’t really a very professional assessment of a film, but it describes the moment perfectly.

“Vincere” is not rated and has completed its run at The Pocono Community Theater in East Stroudsburg, PA. It is unfortunate this film has completed its run so quickly as the theater serves the community best by showing such cinematic work. But, at least it was shown giving the area an opportunity to see it. After all, this reviewer is pretty sure “Vincere” was not shown in the local multiplex. For films currently being show at the theater, you may call 570-421-3456 for titles, show times, and dates. Most films run one week (as did “Vincere”) but some films may be held over for an additional week or two depending on ticket sales.

After the Friday May 7th showing of the film, The Forwardian Arts Society Gathered in The Pocono Community Theater’s Café to chat about it. The turnout was minimal but the conversation was very engaging as many of the visual, psychological, and historical aspects of the film were explored. We invite you to join us Friday June 4th to watch a film and participate in an equally stimulating conversation. Please contact me at forwardian@hotmail.com for more information.
Posted by Unknown at 7:21 PM