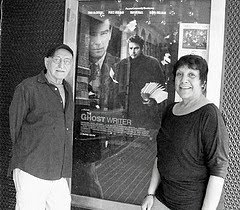 The Film “The Ghost Writer” is a film adaptation of the Robert Harris novel entitled, “The Ghost.” Both are about a young successful ghost writer portrayed by Ewan McGregor who remains nameless throughout the film who is hired to complete the memoirs of former British Prime Minister Adam Lang as portrayed by Pierce Brosnan. It seems a simple enough assignment until we learn the ghostwriter’s predecessor died while working on the project.

Soon after the ghost writer begins his work, the former prime minister is accused with war crimes for his part in sending terrorist suspects to the CIA to be tortured through “Water Boarding.” He is called to answer to the world court but seeks asylum in the US as the country does not recognize jurisdiction. The ghost writer soon begins to discover some dark secrets regarding the former prime minister for which his predecessor might have been murdered when he discovered them.

As in the novel, the allusion to former British Prime Minister Tony Blair to the Adam Lang character is very transparent which is an assertion not denied by either the author of the novel nor by the director of the film. This makes the thriller much more interesting as it encourages the audiences to speculate what would occur if the plot depicted in the film actually came about in reality. There are, after all, a great many issues left unresolved from both of the previous US and UK administrations might be called into review one day with those responsible for unlawful acts made accountable for their actions. Perhaps the film will encourage the world court and other international investigative bodies to explore some past behavior of those fought the dragons of terrorism only to become Nietzsche-ian Dragons themselves.

But, beyond the comparisons and speculations, “The Ghost Writer” is a very neat and delightfully complex political thriller. Director Roman Polanski skillfully creates a claustrophobic environment in which he leads the audience in and out a maze of clues and discoveries. From the very first moment the young ghost writer steps into the former prime minister’s concrete fortified compound, we know there is something wrong about to happen. We don’t know what it is, but the mood the film sets encourages us to be aware what we feel will happen will indeed happen any minute.

The suspense is furthered by our observations everything the ghost writer discovers is placed where he can find them. We are amused by his self congratulatory smirks while considering himself so clever, but we now he is being led. What we don’t know who is leading him and why. We never really find this out, though, which creates a desire to see the film once again as the film also creates a sense we’ve might have missed something in our first viewing of it. And, this reviewer might become one of the happy number who ventures out to see it again.

“The Ghost Writer” is rated PG-13 and is currently running at The Pocono Community Theater in East Stroudsburg, PA. You may call 570-421-3456 for show times and dates. Most films run one week but some films may be held over for an additional week or two depending on ticket sales.

After the Friday April 2nd showing of the film, The Forwardian Arts Society Gathered in The Pocono Community Theater’s Café to chat about it. The turnout was minimal but the conversation was very engaging and proved to be as suspenseful as the film. In fact, our conversation led to a number of questions and speculations on who was behind all the plots and why. We invite you to join us Friday May 7th to watch a film and participate in an equally stimulating conversation. Please contact us through our website for more information. You’ll find more photographs of our gathering at The Forwardian Arts Society Film and Chat Gathering Gallery at www.myspece.com/forwardian_arts.

Those websites mentioned in this review included The Pocono Community Theater at www.poconocommunitytheater.org and The Forwardian Arts Society at www.theforwardianartssociety.com.
Posted by Unknown at 8:04 PM