The Paradise of the Heavenly PCT 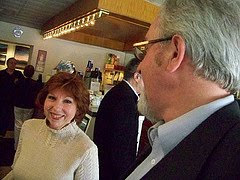 The Pocono Community Theater in East Stroudsburg, PA held an Artist’s Reception on Saturday April 10th which featured the primarily photographic works of Rod Cameron entitled, “Paradise Found” as well as the oils and watercolor works created Clarissa Jan Ward entitled, “Not only the Earth but also the Heavens.” Although the work had a similar soothing effect upon the viewer, the contrast between the artist’s styles made for a very interesting and satisfying show. One can appreciate being easily caught up in the gentle flow inherent in Ms. Ward’s natural settings while the Digital Photographic Images of Mr. Cameron quietly excites the mind as it endeavors to discover how their wonderful effects were achieved. The exhibition continues until May 16th. You’ll find more photographs relating to the event in The Forwardian Arts Society Pocono Community Theater 2010 Gallery Part 2.

The Pocono Community Theater in East Stroudsburg, PA offers local film lovers an opportunity to experience the best in independent and foreign film not commonly shown in larger commercial venues. These include films made by local film makers and the inclusion of special events to enhance the community at large. The next events at The Pocono Community Theater will include “Silent Shakespeare” beginning at 8pm on Thursday April 22nd featuring a showing of the work of William Shakespeare as depicted in films made during the Silent Film Era while accompanied by music performed live by Dreams of Fire, Mad Lucas, and The Business Fairy. In addition to all this, The Pocono Community Theater will host The First NEPA Poetry Slamfest beginning at 8pm on Friday April 30th featuring 2009 Women’s Individual Word Slam Champion Rachel McKibbens along with voice performances by Youth Poets featured in HBO’s “Brave New Voices,” Urban Word NYC, The Philadelphia Youth Poetry Movement, and Urban Mountain Voices. There will also be a Mock Slam featuring Youth spit poetry in a high energy competition. Please Contact The Pocono Community Theater at 570-421-3456 for more information.

Websites of those mentioned in this article include The Pocono Community Theater at www.poconocommunitytheater.org, Dreams of Fire at www.myspace.com/dreamoffiremusic, Mad Lucas at www.myspace.com/themadlucasband, The Business Fairy at www.myspace.com/thebusinessfairy, Rachel McKibbens at www.rachelmckibbens.com, HBO’s “Brave New Voices” at www.bravenewvoices.org, Urban Word NYC at www.urbanwordnyc.org, The Philadelphia Youth Poetry Movement at www.phillyyouthpoet.org, and Urban Mountain Voices at www.urbanmountainvoices.org.
Posted by Unknown at 4:41 PM