Barrymore at the Community 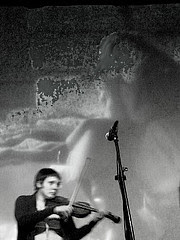 The Pocono Community Theater in East Stroudsburg, PA presented two films made during the silent film era on Thursday April 22nd as part of their “Silent Movies Set to Loud Music” Series featuring the famed actor of the time John Barrymore who was part of a well known theatrical family whose legacy continues to this day through his grand daughter Drew Barrymore. The films were accompanied by music provided by live performances of the bands Mad Lucas and Dreams of Fire along with a solo performance by guitarist/songwriter Keith Leslie aka The Business Fairy.

The first film was titled, “Sherlock Holmes” which was made in 1928 and considered lost until it resurfaced in the mid 1970’s. It was directed by Albert Parker and adapted from a play based on Arthur Conan Doyle’s work with John Barrymore playing the famed detective. The band Mad Lucas performed during the screening featuring Chris Decker on Guitar and Vocals, Chris Sullivan on Guitar and Vocals Jeff "Major Threat" Shatt on Bass and Vocals, and Jaime Miller on Drums. In spite of a technical mishap which disabled their microphones, they performed with great energy and bravado. In fact, the lack of amplification enhanced the performance as it transformed to an acoustic set with songs complimenting the scenes appearing on screen.

The second film was titled, “Tempest” and was made in 1928 and directed by Sam Taylor. The film is noted by some elaborate settings created by William Cameron Menzies who won an Academy Award for Best Art Direction in 1929 which was the first year The Academy of Motion Picture Arts and Sciences began presenting them at the Hotel Roosevelt in Hollywood, CA. John Barrymore portrayed a young officer who rises to the rank of Lieutenant in spire of his humble heritage. He is shunned by the aristocratic society but falls in love with a princess of the Romanoff family. He is rebuffed by her, arrested, and stripped of his rank. However, the Communist Revolution takes place and things change for the better for him during The Red Terror which occurred in Soviet Russia in 1918 becoming a series of mass arrests and executions conducted by the Bolshevik government.

Guitarist/songwriter Keith Leslie aka The Business Fairy performed many of the songs he has become well know for throughout the area to the appreciation of the fans who were in attendance during a early portions of the film. He was followed by the band Dreams of Fire featuring Jimmy Lee, Charlie Abriel, Kevin Vanderhoof, Sarah Shown, Will McGrath, Joe Lynch, and Abby Braman who performed their special brand of music presented with all the theatrical frivolity they have become well known for. Their performance brought the film and evening to a delightful conclusion leaving everyone eagerly awaiting the next Silent Movie set to Loud Music Event. You’ll find more photographs in The Forwardian Arts Society Pocono Community Theater 2010 Gallery at www.myspce.com/forwardian_arts.

The Pocono Community Theater in East Stroudsburg, PA offers local film lovers an opportunity to experience the best in independent and foreign film not commonly shown in larger commercial venues. These include films made by local film makers and the inclusion of special events to enhance the community at large. The next event will be The First NEPA Poetry Slamfest beginning at 8pm on Friday April 30th featuring 2009 Women’s Individual Word Slam Champion Rachel McKibbens along with voice performances by Youth Poets featured in HBO’s “Brave New Voices,” Urban Word NYC, The Philadelphia Youth Poetry Movement, and Urban Mountain Voices. There will also be a Mock Slam featuring Youth spit poetry in a high energy competition. Please Contact The Pocono Community Theater at 570-421-3456 for more information.

Websites of those mentioned in this article include The Pocono Community Theater at www.poconocommunitytheater.org, Dreams of Fire at www.myspace.com/dreamoffiremusic, Mad Lucas at www.myspace.com/themadlucasband, Keith Leslie aka The Business Fairy at www.myspace.com/thebusinessfairy, Rachel McKibbens at www.rachelmckibbens.com, HBO’s “Brave New Voices” at www.bravenewvoices.org, Urban Word NYC at www.urbanwordnyc.org, The Philadelphia Youth Poetry Movement at www.phillyyouthpoet.org, and Urban Mountain Voices at www.urbanmountainvoices.org.
Posted by Unknown at 3:41 PM