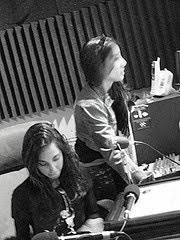 The Petraology 233 Show which is aired Wednesdays beginning at 6pm on The Pocono Internet Broadcasting Company (PIBCO) in Stroudsburg, PA held a graduating ceremony on Wednesday April 21st in order to confers degrees in Petraology upon their graduates. According to the sisters Vera Petra and Clarisa Dear who co host the show, Petraology is an interactive study of Rock Culture and listeners to the show can earn Bachelor Degrees by answering a series of questions related to the musical form via the station’s website chat function or through the one found on facebook. Master’s Degrees in Petraology were awarded to other station DJs and others who made a special contribution to the show. There were also several Honorary Degrees distributed during the ceremonies as well.

The Pocono Internet Broadcasting Company (PIBCO) in Stroudsburg, PA is a new radio station that utilizes the internet to air its variety of programs. Access to the station can be gained through its website and is interactive most of the time. Many show feature not only recorded music but interviews with artists and musician along with life in studio concerts. PIBCO will celebrate its 1st Anniversay with a “Beatnik Blowout” on Friday April 23rd at The Mollies Restaurant in Stroudsburg, PA beginning at 8pm. Please Contact PIBCO at 570-420-3389 for more information.