The OMN Before the Storm 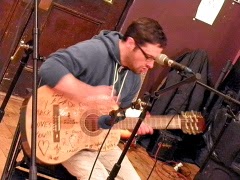 As the threat of freezing rain permeated the thoughts of dread of winter’s return for those who live in the Northeast PA region, a modest number of souls braved the predicted climatic elements to partake of another installment of The Sherman Theater’s Living Room in Stroudsburg, PA weekly Open Mic Nite Series on Sunday March 30th. I arrived a bit later than usual and found the list only partially filled when I arrived just before the 7pm hour. This was an unusual sight as the document is often filled within seconds after the 6:30pm announcement is made. It was explained to me the evening is planned to be a shortened one due to the daunting meteorological reports and thus fewer performers were present to sign in.

It was only a few moments after learning this news did co host, Andrew Oldfield, take the stage to welcome those who were present. He then announced the time limits to the sets to be performed had increased from 10 minutes to 15 due to the number of sign ins and there will be a Living Room Open Mic All Star Show on scheduled for Friday April 25th featuring Justin O’Neil Rosario, Theomar Chakey Francois (aka Sunny Shading), David Pugh, C-Rock 113, and Sick Antelope Party www.facebook.com/sickantelopeparty. It was shortly after these announcements were made did the first performer for the evening take her place before the microphone.

Dee “Songbird” Allen has been a favorite among The Living Room gathering since began singing her first song so many months ago and her renditions of the several songs she sang began the night off with a beauty that encircled those who were fortunate enough to be immersed in her voice. She was joined by Tycho whose musical artistry upon the guitar enhanced the songs and together they enraptured a symphony of sing along songs the delighted the crowd. They were followed by electric guitarist David Pugh who is another favorite among those who frequent the venue and is scheduled to be part of the upcoming All Stars program. He performed a number of songs whose riffs penetrated the gathering with their resonance and whose lyrics dug into the very soul.

David was followed by Kes who is yet another favorite of the Living Room crowd and will be part of the upcoming All Stars program as a member of Sick Antelope Party. He will also be featured in the upcoming Artists’ Reception scheduled to take place at The Living Room on Saturday April 5th. The considerable musical skill of Kes proved to be very evident as he performed a number of songs that touched the heart of those who absorbed them into their essence.

Kes was followed by a guitarist known as Sirhan Sirhan which is the name of the person who assassinated Sen. Robert F. Kennedy on June 5th, 1968 at the Ambassador Hotel in Los Angeles, CA shortly after it was announced he had won the California primary and would likely had been the Democratic Party’s nominee for The President of the United States’ position. With a guitar in hand, Sirhan Sirhan performed a number of songs with a voice that could not only convey the deeper meanings of the lyrics through his voice but felt from within as the emotion he extruded from his vocals embodied the soul with its substance.

Sirhan Sirhan was followed by C Rock 113 who will be among those performing the Living Room’s Open mic All Stars Show in April. With music playing upon the venue’s sound system to accompany him, C Rock 113 gave voice to concepts and perceptions that ranged from the deeper crevices of the eternal soul to the thoughts created by the frustration of our time and political leaders as echoed in the cry, “The revolution will not come in silence because the government is moving us to violence.” The powerful words brought to mind a quote by Fredrick Douglas who was a slave in the 1800s and became an African-American social reformer, orator, writer, and statesman after his escape from the southern plantation that bound him. He is known to have said, “Power concedes nothing without a demand. It never did and it never will.” C Rock 113 was followed to the mic by a poet named “Mary” who made her debut the previous week and whose returned presence brought a quiet song to the heart.

The evening came to a conclusion with a performance given by Wilbium. Donned in aviator’s head gear and accompanied by a computerized apparatus from which he abstracted a series of musical notes from, Wilbium moved the gathering through his adept instrumentalities and vocalizations that enhanced the psychotropic effects of the compositions he placed before the altars of the imagination. As the performance came to an end, the evening’s co host, Andrew Oldfield, took the stage to offer his final words of farewell to the gathering and wishing all safe journeys home. It was at this point did the company share its goodbyes with one another before heading out in the rain to leave the venue with thoughts of returning the following week to enjoy another installment of the series. You’ll be able to find more photographs taken during the Sunday March 30th Open Mic Nite Session in The Living Room 2014 Gallery Part 2 at www.facebook.com/media/set/?set=a.10152275669355421.1073741879.636000420&type=1.

The next installment of the Living Room Open Mic Nite Series will take place on Sunday April 6th beginning at 7pm with sign ins beginning at 6:30pm. Musicians, poets, writers, and anyone who would like to share something with a receptive audience are welcomed to do so. You can learn more about The Living Room Open Mic Nite Series by Exploring their Facebook Page at www.facebook.com/OpenMicAtTheLivingRoom.

In addition to the Open Mic Nites presented at The Living Room, the venue also holds a Gallery which presents the work of visual artists from around the area. Their next exhibition will feature the work of Leonard Boone, Ashley Fontones, Eric Goins, and Ben Schwartz with an Artists’ Reception scheduled for Saturday April 5th beginning at 6pm. Music for the reception will be presented by Kes Lyman and Olivia Zinn along with a “Perspective Objective!” Photo Contest, an Art Raffle, and an opportunity to make a donation to their Community Tree with proceed benefiting the gallery. The exhibition continues until April 30th. The following exhibit will be their a group show in May titled, “Art-ology.” Please contact the gallery’s Director and Curators, Keyaira and Drew Ozkenel, at 570-421-2808.

The Living Room is located on Main Street in Stroudsburg, PA next to The Sherman Theater who owns the building. The Living Room is a non-profit artspace and community hub featuring live music, performance, and other events in an intimate setting at affordable prices. Please Explore The Living Room Facebook Page at www.facebook.com/pages/The-Living-Room/123978921059378 for more information on The Living Room, all they have to offer, and how to be a part of it all.
Posted by Unknown at 12:04 PM