A Day for the Records 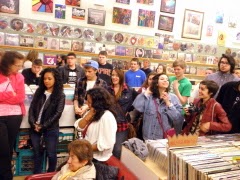 On a day filled with the clarion call of Spring, The Main Street Jukebox and the sidewalks surrounding it in Stroudsburg, PA were populated by those who, with a love for the nuanced sounds music makes upon a vinyl disc, answered its summons. The 7th Annual Record Store Day (which is an internationally observed on the third Saturday of April to celebrate the culture of independently owned record stores) took place on Saturday April 19th at the local record store that has become an icon to the area during its 20 years history. Music’s ability to change the world was celebrated as scores of recordings captured on Vinyl and Compact Discs (CDs) were sold throughout the day bringing music to the lives of those who purchased them.

The appearance of a number of bands and individual musicians enhanced the day filling the town with their songs paying tribute to the celebration. Those performing on the sidewalk included Guitarist Eric Funn whose smile was communicated through each song he sang and translated to the language of the heart who joyfully repeated their melodies to itself. A folk musician known a C. O. G. and his guitar also touched the sidewalks of Stroudsburg with songs sung through a voice filled with the years and the experiences that allowed every note and lyric echoing the profound cries of humanity and its disappointments to ring true. Besides making the streets a meaningful place to walk, these two musicians of the soul bless many a venue with their talents which include occasional visits to The Open Mic Nites held at The Living Room in Stroudsburg, PA www.facebook.com/OpenMicAtTheLivingRoom on Sunday Evening.

While Eric Funn and C. O. G. was performing it the light of a glorious Spring day, The Main Street Jukebox presented Live (note the capital “L”) music throughout the day. I arrived a while after the first of the concert’s performances were scheduled to begin so I missed those given by I. D. C. (I Don’t Care) www.facebook.com/pages/IDC-i-dont-care/224975130851250 and Brandon Flatley www.facebook.com/flatomatic?fref=ts. But, I understand from friends who were present during their performances that they were great and my faith in their excellent tastes in music leaves me with no reason to question their assessment. It was, however, soon after my arrival to the record store did the first band I experienced take to the microphones with their instruments to begin their set.

A seismic energy filled the room as the very first rip your ass out notes from P. O. W. W. O. W (Pain Of Wisdom World Of Waste) assaulted the audiological sensations of all who inhabited the space with their piercing chords and lyric until the bruises formed by the songs’ meanings brought the gathering a healing hope allowing it to dwell deeper into the musical melee that was set before them. P. O. W. W. O. W (Pain Of Wisdom World Of Waste) consisted of Tom Dente on Guitar and Vocals, Brian Terraciano on Percussions, and Scott Valenze on Bass Guitar who comes form Canadensis, PA. Their hard core anthems sought to heighten the awareness of the ecological needs of the planet as their off stage agricultural endeavors designed to promote simplified local production and consumption of food amplified the intensity of their string busting performance. You can learn more about the band, its music, and how to participate in its worthwhile endeavors by exploring their Facebook Page at www.facebook.com/painofwisdomworldofwaste.

P. O. W. W. O. W (Pain Of Wisdom World Of Waste) was followed by percussionist Blake Fleming whose magical intonations filled the record shop with vibrations that moved those who succumbed to their sonic archetypes toward a mesmerization which transcended all the subliminal awareness one encounters even in the most extraordinary of circumstances. The mechanisms Mr. Fleming employed throughout his set to create a variety of sounds not commonly associated with the instrument showcased his uncanny ability to traverse beyond the realms of mere innovation to that of the unbelievable. Mr. Fleming has recently released an all percussion based record titled, “Time’s Up” which was “recorded using a two input Mbox and a Fostex cassette 4-track …. in the basement of a 150 year old church in the Catskill Mountains” which I (being technically versed as I am) have no clue what that all means but I can imagine it all makes quite an impressive sound an even more so one. In addition to the release of his CD, Mr. Fleming offers lessons in drumming through his DrumSkool program offered at The Living Room in Stroudsburg, PA. You can learn more about Blake Fleming, his DrumSkool, and his music by exploring his Facebook Page at www.facebook.com/pages/Blake-Fleming-Times-Up/452794664761001.

Blake Fleming was followed by electric guitarist Lenny Kaye who is best known for his song writing collaborations and other musical contributions to The Patty Smith Group and whose presence in the Punk Rock era made its musical approach an indispensable element of a number of musical genres that were created since. Mr. Kaye’s smooth chords and lyrical flow channeled its way through the audience wrapping each member in the subtle engulfments of the songs he played until their gentle nibbles became an unsuspecting Zenish bite from which a Satori of quiet wonderments flowed from deep within both the singer and the listener. The songs seemed to move simultaneously on conscious and subconscious levels more so than most compositions do and this gave their simplistic properties a certain charm which enhanced the audiences’ desire to embrace them and allow their essence to touch the innermost parts of their being. You can learn more about Lenny Kaye and his current endeavors by exploring his Website at www.lennykaye.com.

Lenny Kaye was followed by a band known as “Disposable” which consisted of Docter S Jekyll on Bass, Jay Disposable on Percussion, and Chen De Lao on uke, guitar, and throat. A wildness took over the room as the three musicians took the stage. A sense of fun overwhelmed the audience as some honest and straightforward amusement touched the faces of those who were tickled by the sensations of delight the band extended. One could simply say it was three guys having fun with their musical talents to the extent which encouraged everyone to come along and play. This was illustrated when the band handed out instruments to the audience and invited them to utilize their sense of fun to play along. And, we did because the band was so cool. The band has recently released a CD which reflects their sense of humor as it’s packaged as a 45rpm recorded in sterio. You can learn more about it and Disposable by exploring their Facebook Page at www.facebook.com/DisposedOF.

Disposable was followed by the band known as “Lorg” who consists of Sean Costello on Guitar and Vocals, Destin Muller on Bass and Backup Vocals, Henry Heisenbuttel on Keyboard, and Brett Ross on Drums and Throat Drums. If one word could describe the band and the feeling that derives from listening to their performance, that word would be “Dude.” With a mixture of musical genres ranging from Reggae to Ska, the group manages to encapsulate it’s audience through the transcendental elements of the combined essentials of the music they perform and time release the magical properties found within the genres in order to illicit the desired effects. And, these effects could also be summed up in one word and that word would be, “wow.” Lorg has recently released a CD titled, “For Medicinal Use Only.”  You can learn more about it and the band by exploring their Facebook Page at www.facebook.com/lorgreggae.

Lorg was followed by the band known as Edelweiss who was The Main Street Jukebox headlined band. The band consists of Niko Porlier on Vocals and Guitar, Tony Young on Guitar, Thomas Vitale on Vocals and Bass, and Shane Cashman on Percussion. The group plays a genre of music known as “Math Rock” which is commonly “typified by the complexities of its rhythms and asymmetrical time signatures.” Now, I don’t know what any of that means specifically but the deep metaphysical effects of the music takes the listener upon a journey of which there is no here or there or anywhere one can say they are at present or are going to anytime soon. One can only partake of the whirling journey the band entices those who choose to embark upon through their psychedelically fashioned lyrics and musical nuances. Being touched by the musicality of Edelweiss may be more akin to sharing a spiritual experience than simply being effected by the intricacies of a musical performance which is perhaps why the band had gained such a large worldwide following since it began in Stroudsburg, PA in 2010. You’ll be able to learn more about Edelweiss by exploring their Facebook Page at www.facebook.com/EdelweissOfficial.

According to my good friends at Wikipedia, Record Store Day was “sparked by a comment by Bull Moose employee Chris Brown that something could be done (presumably to boost independent record store sales) along the lines of a ‘Free Comic Book Day.’” A subsequent meeting between Record Store owners in Baltimore, MD led to the day being officially founded in 2007. Since then, Record Stores not affiliated with large chains around the world has participated in the celebration by presenting concerts and art shows to enhance the sale of both vinyl records and compact discs. You’ll be able to see more photographs taken during the celebration held in and around The Main Street Jukebox at The Record Store Day 2014 Gallery at www.facebook.com/media/set/?set=a.10152374587980421&type=1.

The Main Street Jukebox in Stroudsburg, PA has been in business since 1994. Besides offering a wide variety of new and used recordings, they have become a pillar in the community earning the love and respect of those who enter their doors. You can learn more about The Main Street Jukebox by exploring their Facebook page at www.facebook.com/mainstjukebox.
Posted by Unknown at 12:04 PM